So I'm back down the river for another go after my amazing trip up here last friday and wanted to see if the Barbel were still about as the warm weather continues to hang around, so today's plan was to do my usual roving beat whilst using my centerpin and light match rod for the ultimate pleasure of playing a Barbel.

I set up and got into position and organised myself, set up the camera on the tripod and unpacked the scales as i had a feeling today was going to be pretty busy, if I got it right of course!. But after about 8 trotts and no knocks or follows I was'nt feeling confident, so I sat down and flicked a couple free offerings in and waited for them to settle and watch the Barbel and Chub nose the baits and back off, these fish seemed very wary and that was making my task today a bit more difficult so I had to try and work out what the best action was to take so I threw a few more offerings out and sat for about 15 minutes while the fish gained confidence.

So having been at this swim now for about 30 minutes and no luck I decided to try again, so back to the trotting and first cast was into a very good Barbel, the wait paid off and after a good scrap my first fish of the day was safely landed. 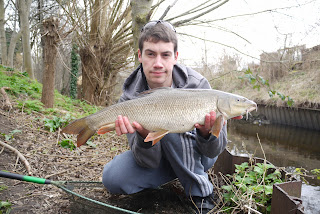 So my patience was what the Barbel wanted and it wasn'nt long before I had another take, which resulted in a nice 4lbs ﻿3oz Chub and then followed by a very powerful little Barbel at 4lbs 2oz, which incidentally fought just as well if not better than the 7 pounder. Great sport.

But the day was only going to get better as I had caught 3 fish in the space of 15 minutes they were truly on the feed and within 10 minutes of releasing the little Barbel I was into another one and this was big, as soon as I hooked it i knew it was another double figure Barbel, 1 all season until last Friday and now 2 in 4 days, my gosh!, but i had not landed it yet and certainly didn't want to come in, every time it got close to the net it would tear line from my centre-pin again nearly ripping the rod out of my hand on a couple of occasions, so with this one I had to be careful but after negotiating with the fish it decided on coming in to get weighed, photographed and getting released properly was best for the both of us, so once in the net I smiled once again at achieving the feat again, this being my 10th double in 6 years and 3rd this season and just confirming that the scales read 10lbs 6oz of pure muscle. 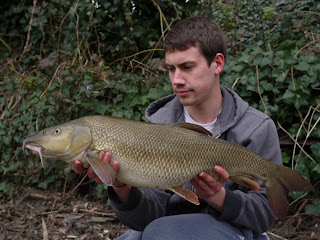 February is turning out to be kind to me. 10lbs 6oz

A very happy chappy once again but as the fish were feeding quite well i decided to carry on fishing and try to catch at least 1 more Barbel and next cast with the bait just glancing the bottom in the current, I was away again but the fight was very short and scrappy, so it was no surprise when a Chub surfaced roughly 3lbs. But after the Chub, the swim went dead and it was time to move on, dusk was approaching fast and if I wanted another Barbel then I had to get set up quick or my window of opportunity would close, so I had to put some shot of the line to keep it on the bottom and feel the line with my finger to feel for any bites and within 20 seconds of the bait hitting the bottom, I was in and was no doubt a Barbel, for about 3 minutes it charged around the pool looking to snap me up on whatever it could find but it was mine when it gave up and another fine fish for the ever growing collection of Barbel at 6lbs 5ozs. 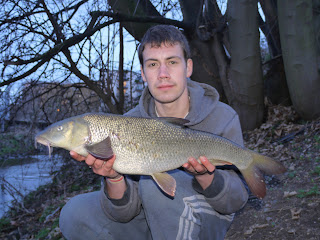 Over the last couple of nights I've had decided that i have to get back on the river before the season end's and my withdrawal symptoms start to kick in, 3 months of no fishing on the river is not what i call a holiday. But the fish do need a break and try to re-populate as well.

Last night I decided i was going to go for a very early session this morning before work, the sun was bearly lighting up the sky by the time I was set up and ready for my first cast, my favourite tactic is to walk a chosen beat armed with my Polaroid glasses and search the water for any Barbel that may be loitering around but no such luck for about 3 hours and my only reward was a pristine Chub of about 2 and half pound, which fell to trotted meat as per usual.

So with time ebbing away i'd kept moving on up river to a nice pool that has a deep run in the middle and normally thats where the Barbel hold up if there around and appearing out of practically nowhere 2 Barbel, (1st about 4lb and the 2nd about 6lb) showed up and started to hoover up everything in sight right in front of me but just seemed to get very edgy when they would get within a foot or so from my trotted bait and after a few casts i had admitted defeat to their mind games and left them be and try to find something more obliging.

The time was approaching 9am and knowing that within half an hour roughly left I had to find something, so I was up against it but my luck was just about to change for I moved into my next swim to see a Barbel sat on a sandy patch in the middle of the river holding bottom, I had to remain calm and focused, a strike to early or late would almost guarantee me a blank here, so I crouched and baited the hook and aimed the bait about 10 feet above my intended quarry and just allowed the current to bring the bait to the fish, in a flash the Barbel moved 2 feet up river and engulfed my apparently tasty offering, I knew I was into a good fish, but how good didn't dawn on me until the normal powerful 5 minute battle was over and removed my Polaroids did i realise just how big this Barbel was when guiding it into my net.

This was a new personal best for sure and i was absolutely delighted, in fact I'm still smiling now writing this, so having landed it, I reached straight for the scales and deducted the net to zero and watched with anticipation to see the needle settle on 11lbs 12oz!!!, after all the hard work I've put in and fishing in weather that isn't fit for anyone, I had finally got my reward and got a few pictures to remember this day as I know I will and after reviving and letting her go to fight another day and hopefully create lots more little Barbel, I packed up and went off to work. 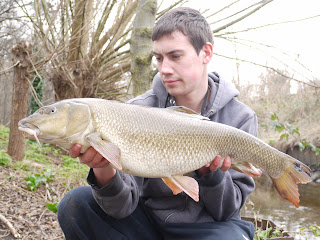 Also this Barbel is the second double I've had this season and now 9 different doubles since 2006 and one other fact is this fish also beat my P.B that has stood for almost 6 years.

After some very cold weather the fish seem to have taken a break from playing my game, with a couple of mild days and with the river warming up a couple of degree's i thought the fish should be feeding a little bit better and my target today was some Chub preferably a 5 lb + one would be nice.

So after travelling an hour to a nice spot on the river set up my trotting rod with my centre-pin and hoped to get some action as this swim looks so good. 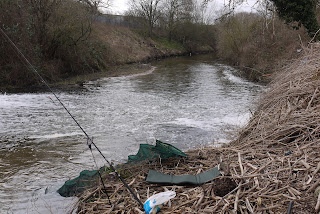 So the tactic as always with the Chub is a nice avon spigot 6BB with a size 16 hook and a variety of baits trotted through there hide-out and first chuck and into a nice big Chub already, definately over 4lbs with that safely in the keepnet, took a few casts to get another bite and then had an almighty fight on the light gear, so much fun and yet another 4lb + Chub, seemed like the shoal were of a decent size so after putting that in the keepnet as well, the bites started to dry up but did manage one more big Chub but again above 4lb but no 5lbs + fish but maybe down river. 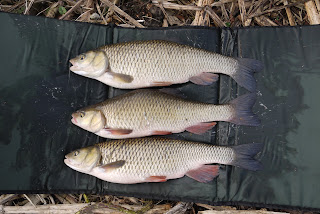 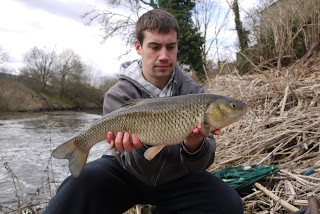 Pick of the bunch at 4lbs 12oz

So i moved down and had a dabble in a few spots but no joy, so i sat up in a new swim and back to trotting and had a Chub first cast 3lb +, after putting that fish back, had to wait about 20 minutes for the next take but when it came, the take immediately made it clear what i had hooked and was extremely surprised to hook one of these as i didnt know Barbel were in these waters, so very good to know and a cracking fish obviously a personal best for this river, the fight was brilliant on the match gear and on the centre-pin the control was great, so after a 5 minute battle i landed the Barbel and got some piccy's and weighed it and went 7lbs 5oz very chuffed indeed. 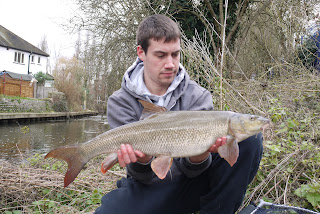 So onward and downward to get some more Chub and did manage a bag of fish in a deep run down stream, which comprised of 9 Chub and a solitary Dace with two more Chub over the 4lb + mark, but unfortunately no massive Chub, i know there here. 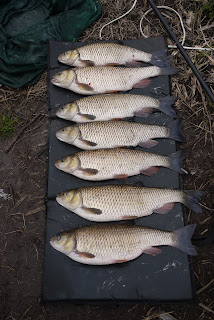 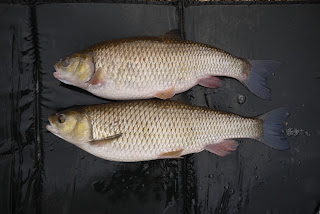 After a long week off of the bank, I was itching to get my tackle together and have a go, change of  scenery and a change of target species, so yesterday i went for some Brown Trout.

With the snow over the last couple of days the river was up and very coloured due to the melt water but in the shallower water the Trout were feeding really well and had 2 small ones around 3-4ozs each and after a short walk down river did manage to get one that gave a good account of itself, which was very nicely marked, which weighed just over a pound, after that i did get another small Trout and then the Gudgeon moved in and after catching 16 of them, I moved off down river. 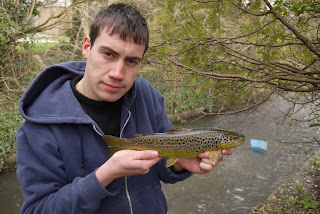 So after searching out a couple of good looking Barbel hide-outs for a later date, I noticed a patch of bubbles out in the middle of the river so with a trusty piece of hovis i cast out and within a minute the float slid away and latched into a good solid fish, but what was it?. After a good scrap and a couple of minutes later, i landed a nice chunky Carp, the second in a fortnight. 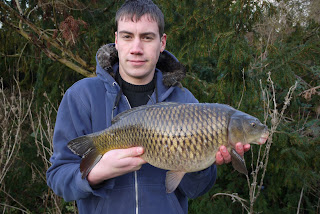