After a long awaited return to a little slice of heaven, myself and Brian had a catch-up day targeting Grayling and hopefully avoiding Trout and conditions couldn't been any less Grayling if it tried. Beautiful sunny day followed a chilly morning where we had both spent the night on the R.Itchen as I looked to finally break my Itchen Barbel duck but no such luck there, of course.

I always struggle to sleep the night before heading into deep Hampshire so it only seems right to fish instead. Using very light gear as usual we both set about stalking Grayling in the crystal clear waters that flow toward the Test some distance downstream. Brian struck pewter first but I shall leave him to blog about his results (available early this week - Brian' blog), it took me a little while to slip into my groove and at one point I could do no wrong and after plenty of trotting the fish kept coming, it was a much needed change from the busy work/family life I currently have to just relax and no pressure on the day, just enjoy it.

Enjoy it I did.

Peering over the edge of reeds to see good Grayling holding station and picking off the odd maggot was fantastic to see as their confidence was built before tempting them on my 12ft float rod and pin. This very satisfying way of fishing lasted all day as I ended up with 21 fish in the end with 9 being over a pound, with my best three going 1lb 11oz, 1lb 15oz & 2lb 1oz, the other ones were mostly around 1lb 8oz and most importantly the Trout really didn't seem to be present in great numbers like normal and more notably very in-active which enabled the Grayling to feed better too.

Here are a few images of my best two fish which capped off a great day in great company in great surroundings.

You always know when they are bigger fish as they take on that dark pewter like complexion.
...And some others images of the day... 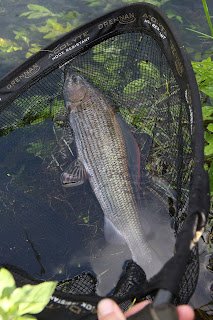 Email ThisBlogThis!Share to TwitterShare to FacebookShare to Pinterest
Labels: angling for grayling, grayling

Much sooner than I initially thought I found myself once again searching the river Nene for a double figure Barbel. An early start saw me heading around the M25, then M11/A14 before joining the final stretch of my journey. Arriving long before sunrise I met up with my mate Ashley for a days fishing that we hoped would be a blazing success. 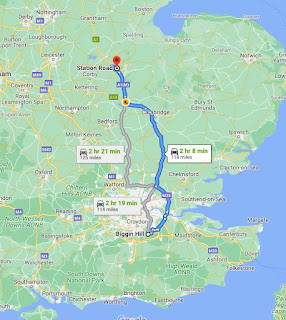 We both return having never blanked over the visit each of us has so far managed, my 8lb 7oz rod wrencher and Ashley managing to tempt a monster of 12lb odd, a fish that size would have been out of this world! All I had to do was find one. As an hour before sunrise ticked by we made our way to the riverbank and having already set-up the baits were cast out in no time and the anticipation levels began to sore as within minutes my rod tip began to show the tell-tale signs of feeding fish, but was it a Barbel?

Plenty of time was spent sitting on my hands in the early exchanges as I found myself staring at a rod that was showing plenty of promise, the all important lurch for the river wasn't materialising, with the odd liner sending the heart rate through the roof only for the rod to bounce back immediately the novelty of a busy rod tip started to wane. The Chub were clearly on the feed and most likely not very big ones either.

About 9am we had decided it wasn't happening so the decision to move on up was made and I set about fishing a very nice tight peg where I knew Barbel held up. 7-8ft deep under the rod tip with a large onion reed bed opposite halfway out and a large fallen willow offering a multitude of cover lye just downstream of me, paint me a picture of a Barbel peg this would be it. Very similar to my first peg I got a few tentative touches before the rod-tip lay lifeless, an hour and a half was given to the peg but left without a shot at one of the Barbel I'm certain were just beneath me.

This unfortunate lack of bites or intent was playing out across the river, swim after swim, hour after hour slipped by without a bang of any conviction. What was even more startling was the lack of anglers around, a typically busy stretch of river at peak time of the season on a Saturday and it was dead! Only one other angler was present, which really didn't fill me with confidence and what confidence I had remaining I was pinning it all on dusk to deliver the goods, the weather however decided to throw in another obstacle our way as sideways rain and gusts up to 50mph ravaged the Cambridgeshire countryside, not my idea of good weather, but fish do like to feed well in unsettled, turgid weather, especially when its mild rain.
By 4pm Ashley had had enough and decided to call it a day, not a bite for him made his decision easy, on the other hand dusk was only a couple hours away and felt compelled to stay, so I hunkered down under the brolly and moved every hour to hour and a half in between the rain showers. As dusk came and went though my decision to stay was not rewarded this time around and by 1930 I had to call it quits and my second visit to the Nene resulted in a blank, I felt confident of action but in truth it wasn't forth coming and maybe worth waiting for the conditions to improve, maybe head back in February on a nice mild day with billions of gallons of fresh warm rain water coursing through its veins!

246 mile round trip for a blank, I suspect there will be plenty of those during the course of my challenge, it certainly is not going to go my way every time!