It's Been a Tough Spring.

I can almost count the amount of fish caught this closed season on two hands its been that tough, I hoped with more stable and favourable Tench weather that I'd really get amongst them in the numbers that I'm used to.

To begin with things were slow going and considering the bottom was being ripped up in sections of the lake I was expecting action fairly quickly, unfortunately this didn't happen right away and had to wait a good a hour or two before the first Tinca slipped up. A good solid fight as usual ensued, with most of it under the rod tip I was always within touching distance. Once its resolve was broken I slipped a lovely mint conditioned Tench into the net. A pleasing 6lb 3oz on the scales and what I hoped to be the beginning of a catching spell. 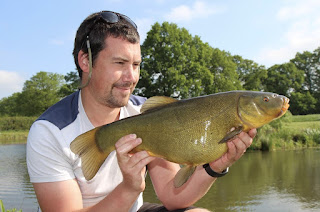 Also when netting that Tench a Smooth/Common Newt was in the folds of my net, rolled up in the clay! 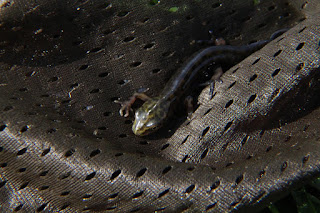 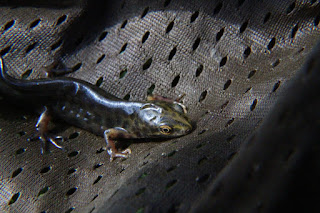 But, much befitting for the last 3 months of fishing I only got the odd knock and a couple of missed bites on the float, man this has been tough going. So around 11am I decided to give it a break and head off to do some walking in the forest to get some exercise. With the camera in hand I also got some great shots (improvements on last years attempts.

After a 4 hour rest I got back to the Tench fishing and annoyingly I could see numerous fish moving around in the upper layers of the water column and wasn't until later on in the day and observing was glaringly obvious that the Tench were beginning to group and no doubt spawning was firmly on their minds in the coming days. So for me the Tench fishing is over before it had barely begun!

I AM FIRMLY LOOKING FORWARD TO THE RIVERS OPENING UP!

It has been diabolical and thats putting it mildly, lets hope that fortunes improve and I can get off to flying start on the double figure Barbel challenge where I begin the season on 5 rivers.

Thames, Wandle, Sussex Ouse, Hampshire Avon and Trent currently ticked off my list, if I can get up to 10+ by the end of this season I will be ecstatic to say the least. Fingers and toes crossed.