Due to a change in plans I managed to escape out this morning to get one last session in before I go for my summer break, after a 5am start I managed to catch 7 Roach to 9oz, 3 Dace to 7oz, 5 Minnows, 9 Chub to 4lb 1oz, 2 Perch to 4oz and a brilliant fight off of a 8lb 6oz Barbel whilst stick float fishing on the white maggots and caster which certainly provided a quality fight a different class compared to the rest of the species captured today, but after a very enjoyable morning it was home time to complete my packing. 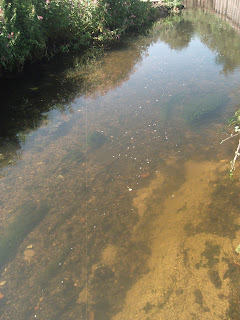 One of my trotting stretches looking upstream. 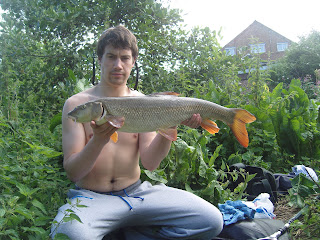 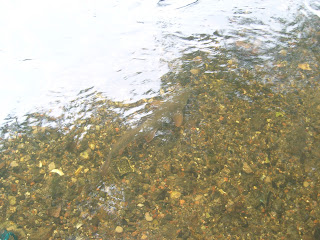 My last week at work before I fly out to sunnier climes I had one last trip planned in search of a double figure Barbel that I'm due, with the build up of anticipation over the last couple of days and the break in the relentless rain it all seemed to be falling into place but with one telling difference, the fish had other plans. 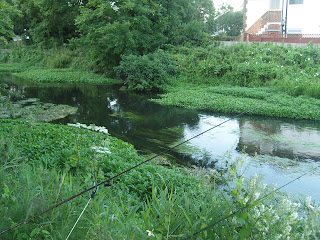 This was my lovely and very Barbel looking swim, a bit choked by ribbon weed but it wasn't too much of a problem, but unfortunately even with a few droppers of hemp and a couple of freebie pellets put out it still didn't persuade the fish to feed until the sun fell out of the sky, with my first take being a typical Chub wrap with nothing on the end, next cast out same thing happened and this time the culprit was hooked but it turned out to be a short and fat Chub about 1lb 8oz, not what I came out for but at least it was a fish.

After that Chub everything went dead again until about 10pm when I had a proper Barbel take which pulled the rod out of the rod-rest within 2 seconds I had lent into it and a fish on but after a very brief scrap it was gone, my target evaded capture bumping me off on a bank of submerged weed, dammmnnnn!.

So I landed a fish I didn't want and I lost the fish I did want, sods law. Back to the drawing board, so I changed my bait and cast a further foot past the ribbon weed into the middle of the river and again I had to wait until about 11.30pm for my next enquiry which was a carbon copy of the first take and again it came out the blue, totally caught unaware I jumped up to reach for the rod, not knowing by now the grass under foot was forming dew making it slippery I got up, grabbed the rod and striking it but as I struck it I lost my footing and ended up on my arse and with my feet in the air......to make matters worse the fish managed to not hook itself thus ending up with a sore and wet bum and no fish on the other end not to mention feeling like bit of a plank whilst chuckelling to myself ( I glad no-one else saw that one).

It wasn't to be my night so by about 1am it was time to call it quits, the Barbel won this round and only my second blank on the Barbel front this season.

Off to Turkey me thinks to relax and re-charge the batteries. Tight lines guys whilst I'm gone.
- July 21, 2012 2 comments:

Owing to work my visits to the riverbank have been extremely limited hence the lack of posts this month and over the last couple of days I have been itching to get back out so last night I decided to get out early and at 4am my alarming sounded for it was time to try target my favourite species, the Barbel.

After a quick journey down to the river I quickly realised how low and clear the river was and most of the ribbon weed was just laying on the surface that would normally be underwater by around a foot or so, so with the lack of water flowing through the task of catching a Barbel was going to be very difficult but with the aide of my Polaroid glasses that are like x-ray glasses they can't hide for long, with around 2 hours of roving in and out of swims I had found a couple shoals of Barbel and Chub with some Carp as well but unfortunately were not interested in feeding so it was a case of leaving them shoals and locate pockets of fish that wanted to feed which I did eventually find, underneath a bridge I noticed 3 Barbel feeding under the bridge but just in sight which were all decent sized fish and chewing holes in the bottom and within my first cast I had a vicious drop back and I was in to a good fish not very long from what I initially thought but a fat one, a couple of minutes of later she was in the net. 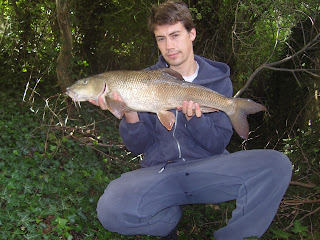 After spending about 10minutes reviving her after the powerful scrap I moved downstream to find some more sport and I finished up with 2 Chub to 3lb 7oz and I also had another Barbel at 5lb 10oz which again put up a great fight in the deeper water of the swim that I found it in.﻿
- July 19, 2012 8 comments:

A trio summer Barbel caught over the week. 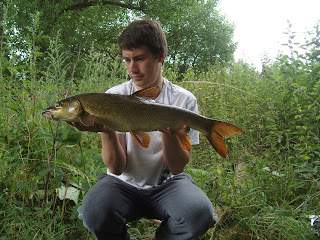 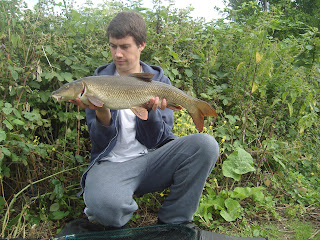 Also I did lose a big Barbel that estimated to be between 11lb - 12lb which could have possibly been a new personal best but it had other ideas and shunned me on a bank of weed and the hook fell out. 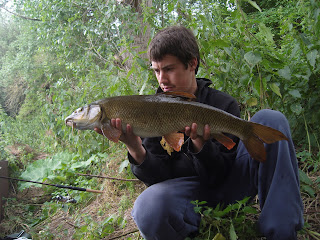 Having the day before only with a short period of time available I decided to make a whole day of it and make an attempt at catching a pound plus Roach or Rudd.

So I was up and at my destination by 7am and after walking just a short distance up river which happened to be extremely low on water and gin clear I spotted a shoal of Roach up to about 2lb on the gravels, just what I was hoping to see but as I was going to find out quite quickly was that the Roach were not willing to feed and after an hour or so of watching them charging around the pool following each other past my bait time and time again I decided it was time to move and come back later.

After that disappointment earlier I did have a back up plan that consisted of another shoal of Roach that frequent another spot about 500m upstream and when I crept into the swim I noticed a massive group of Chub there with just 1 or 2 Roach and Rudd amongst them and as we all know what will grab the bait first so I left the swim alone and pushed further up and thought to myself lets just go Chub fishing until the water rises.

Only for a little while I went off topic and an hour later I had 19 Chub averaging 3lb 0oz and the two biggest at 4lb 8oz and 5lb 1oz respectively. 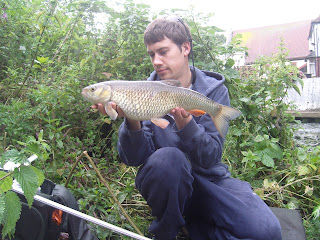 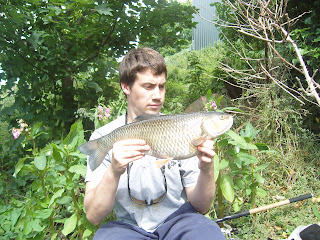 Whilst waiting for the water to rise the Chub fishing was a good bit of fun with a haul of around 60lb in just over an hour and by which time the level started to increase it was time for me to head back down to the spot that I started in and with my first cast into the pool on casters I had a fish on but it turned out to be a Dace of about 6oz and with the subsequent cast I had another take which did feel a little more resistent and it was a...... ROACH! and it looked a good fish aswell but it was'nt in yet and it kept diving into the weed on the bottom and the weed floating downstream trying it's best to lose the hook and being a size 18 barbless it was'nt a hard task but I did manage in the end to slip my target over the net, job done! 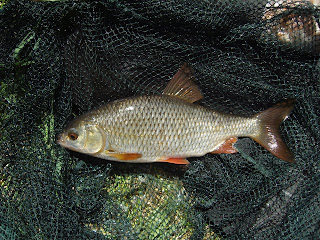 A 1 lb 1oz﻿ redfin in a massive net perfect fish

﻿So with my target captured I carried on to try and capture it's parents but unfortunately the rest were not as brave or stupid which ever side your on. With that it was time to move off so I decided to go and do some Barbel fishing, naturally. En-route I gave Stuart a bell and see if he was fishing, which he was'nt with which he said he'd come and watch, little did he know I was going to employ him as head ghillie for the afternoon.

The river looked good and visibility was as good as usual for stalking purposes which is the only way to do it, so after a short natter it was down to business and I hooked my first Barbel of the session quite quickly and what a great fight it was aswell taking a few minutes to bank and in the tight space to operate in it proved to be a fun experience, with Stu on the net the Barbel was tired and glided towards it and then Stu tried to deploy the quick catch and release tactic by nearly knocking the Barbel off but it was'nt to pay off, but second time round he did land it , I think the Barbel and Stuart have an arrangement. Number one at 6lb 10oz a spawned out female. 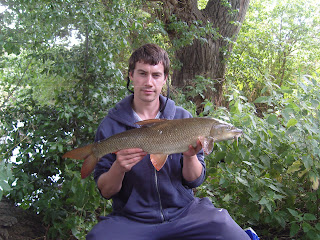 ﻿
After reviving that fish I had about 18minutes of again just nagging with Stu and hung around the same spot as I knew there were a shoal of Barbel present so it was only a matter time until my finger nearly got taken off whilst bouncing my bait along the bottom, with a powerful take right under my rod tip pretty much I was in again with another medium sized Barbel on the end, by now with Stu looking on in amazement that I hooked a second fish out of the same swim, 4-5 minutes later number two was banked with my ghillie in better form :). 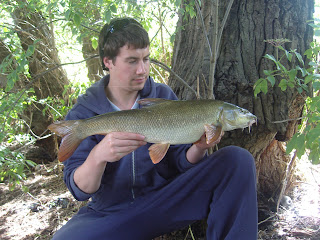 ﻿Another 6 pounder, was turning out to be a very good day and it was about to get better aswell when 5 minutes later I had another take same place same strategy number three was in, Stu was becoming a brilliant ghillie indeed with the netting and pictures spot on, I never usually have anyone with me as I focus best on my own but I could'nt go wrong as when I got the presentation spot on they could'nt resist. Cheers mate. 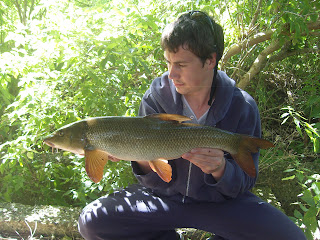 After a mad 25 minutes and 3 Barbel later, Stu and I made our way up river but there was no more joy, so back down river to just past where I had the Barbel earlier and I did have another Barbel at 4lb 2oz which up a spirited little battle for a smaller fish and after that I had a 2 Perch, 1 Roach and a few small Chublet, all in all it was a brilliant days fishing on two different rivers. ﻿
- July 01, 2012 3 comments: