It has been a fairly quiet time for me of late on the fishing front, with a culmination of moving into a new house, alot of work currently on and spending a little more time with the Mrs time to head out on the banks has been very limited indeed. But when a gap the size of a day comes up then a road trip was immediately called upon, destination was of course, the mighty Stour.

Usually for long distance trips I'm up before the sun, this time however I didn't fancy hitting the tarmac at 430am so I opted for a more leisurely pace and left home around 7am. On the river just after 9am it was time to find some fish, I initially started on the Avon stalking runs in the weed for the camouflaged Barbel and Chub but no matter how hard I looked the fish were nowhere to be seen, it didn't take long to head over to the Stour and I had a couple of sections that I fancied.

Great thing about this river is it is big and lots of places to hide, but I know where some hide so it was a case of trudging to said area, at first I didn't fancy fishing straightaway as I wanted to build up their confidence. twenty minutes or so had passed when I started to see big sets of white lips just downstream, it was time to get going and the bait didn't even get to the bottom! the rod lurched over and I was in, the fight was half decent but I was more worried about the landing net up the bank and just out of reach, with my rather long reach I just managed to grab the end of the pole and drag it down the bank, luckily this Chub didn't fight very hard and it looked a good fish, once it slipped into the net and started to hoist up the bank it clearly was a weighty fish, once on the nice wet grass I could see it was a big Chub. It didn't disappoint either as she registered 6lb 1oz and a season's best.


I was very chuffed by that Chub and for a summer fish it was pretty big, the ultimate target is a 7lber but 6's aren't to be shied away from, good fish and just the sort of fish I'm happy to travel 103miles each way for. The fishing wasn't easy after that as they became very aware of my presence so it was time to leave them alone for another time, I did try a good few swims but fish were proving difficult to catch, the Chub were committing but I could not connect to them which proved very annoying, this set of circumstances continued throughout the day and I struggled to focus after the constant misses earlier in the day. As dusk came I was in position and baited up but I could only sit and watch a pair of Otter's chasing a mid-double figure Pike around my swim which certainly wouldn't do the Chub fishing any good. Over and out for another day.
- August 30, 2016 2 comments:

Email ThisBlogThis!Share to TwitterShare to FacebookShare to Pinterest
Labels: chub, In search of monster Chub

Grass Carp in the Netherlands.


It has been quite a while since I last posted, this is owing to a mixture of being really busy with work and when I have been fishing things hadn't exactly gone to plan so they have more often the not ended up being blank sessions, recently I have been targeting Barbel on an unfished stretch of river but access at the moment has been difficult as has the location of the Barbel, I'm sure they are there just a case of dropping in on the shoal or the baiting programme is found.

On Thursday last week I flew out to Holland with my partner to visit some friends who we met when we were in Asia, so the plan was to spend three days over there to catch up and the plan was to do a little fishing too, of course. The target for us on this trip was Grass Carp and having never caught one it would be a whole new chapter to my angling career, here in England there isn't many places that I know where this powerful fish inhabits but after my success in the Netherlands I will certainly make an effort to locate some over here. 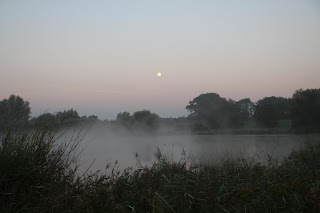 During our three day stay in Leerdam myself and Yannick headed out before the sun was thinking about rising, on the water for around 530am the mist just started to rise off the fields as the sun crept up on the horizon, both morning's were bound with stunning sunrises and the increase of light values got some of the resident Grass Carp on the surface, but these weren't the only species patrolling the surface, Asp are a species of fish I think I've only heard of once before but never seen a picture of one, so I got one, well a couple which was a definite bonus and fought a little better than I thought too.

Before we really got the Grass feeding very confidently we had a few Asp taking off the top and couldn't resist catching one, it didn't take too long either as this perfect conditioned fish of around 3½lbs, the Grass Carp were certainly milling around and at a little before 8am the unmistakable lips of my target appeared from the lily pads and engulfed the bait, after allowing the line to tighten slightly I struck and the area we were fishing was torn to ribbons as the Grassie ploughed through the thick pads to try and escape, that thankfully didn't happen and after a powerful scrap of 5 minutes or so Yannick slipped the net under a scale perfect fish of around 14lbs ( Europeans don't weigh fish, all done in measurements ) which was just perfect.

Catching a Grassie was the plan it had been achieved so I thought I'd hand the rod over to my host to have a crack at one, understandably the swim was a little quiet for half hour but they did move back in and a couple were really big fish, when the time came a precise cast was made straight into a little gap in the pads, the lips ghosted in behind the bread and the fish just sat there staring at it, not that they are under any pressure, it simply is that they are shy fish but the take was anything but shy, the bread vanished confidently and as the fish turned a huge flank arched over and tore off, Yannick was into a very good fish and in a swim as tight as this there is always a danger of losing fish, after a good five minutes into the fight and the fish went solid, we both feared the worst and after another a few seconds of trying to release pressure the line parted and his prize was gone, the swim does unfortunately come with that hazard.

Onto day two now as that was the last action of day one and we spent the rest of the day away from the water. We decided to repeat the morning before and get up early to get back on the water for another shot at a Grassie, the conditions were similar so we hoped the fish would be feeding well again, the Asp were on the rampage as they were the day before and fairly quickly I bettered my best from yesterday with a very decent fish around 4½lbs which I was very pleased with. 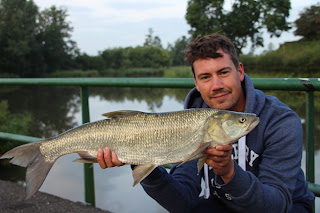 Our target did make an appearance but unfortunately it was all too brief and never had the chance to bank it as after a minute or so the line gave out as the abrasion from the pads cut me off, that fish wasn't as big as my first one but it would have been nice to hold another one, the fish didn't feed as well as the day before but we had a very good time fishing and it was so exciting watching the pads shimmer as the fish made their way through pads across the swim and then seeing the flanks cruise around with the occasional set of  lips sucking in freebees, it's something that I will certainly go back over for and it was great fun and our hosts were good fun. Cheers guys! bedankt jongens!