Last year with the full nationwide lockdown I didn't get my 2020 instalment of what is now something of a once a spring trip. I always have immense fun with the fly rod, however most other disciplines take president and find myself neglecting it after a trip or two. So with our freedoms re-instated to an extent I decided this afternoon to pop out for a couple of hours to one of my old haunts. A wonderful section of urban chalkstream.

The target of course was Brown Trout and having been snowed on in the morning ( maybe 2inches ) the sun was beaming and made for a pleasant afternoon, armed with the polaroids I set out to catch me a fish!

My fly of choice was hotly contested but fell back on this ( I don't know the name of the pattern ) but was devastating on the slow retrieve. Watching Trout queue up behind the fly as I worked it through the upper layers was a great sight, I could have had more than my impressive tally of 11 Brownies. 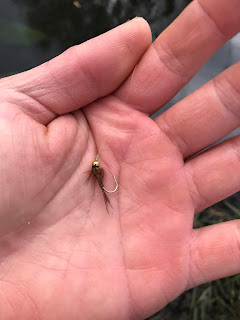 I decided after reaching 10 that I my fun was done, great as it was it lacked the sight of anything big, apart from a fish around 2lb that I landed (but foolishly let it swim out of my net before photographing it) nothing showed nor presented itself to catch...as I began walking back to the car I ran a fly through the same pool I had the 2-pound fish from. A few good casts off the fast water provided nothing which I thought was probably due to the lack of fish in it, for me though that gave me more confidence as smaller Trout won't tend to hang around in areas where big fish are in residence, so I gave it a few more casts when a massive screech from the reel woke me out of my mid afternoon slumber!
A serious battle ensued as the desire to go over a weir seemed an ever present threat, on a 3.2lb Turrall's leader to a size 16 fly it was always going to mean the fish would constantly have the upper hand on me, mercifully she kept to the fringes of the deep pool and slowly tired herself out, I couldn't have been happier with my prize when the net bulged. All 4lb 4ozs of her! 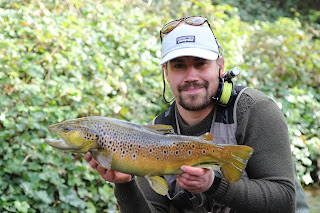 Sadly I have barely mustered a cast since the end of the season and with not much time to hand of late I have found myself planning trips when the weather warms up, so with that I thought I'd set a slightly different target. Last spring I got into Lepidopterology as I noticed a couple of different species flying past that I'd never taken any notice of before hand knew very little of them.

By the end of the butterfly season in early October I had successfully documented 47 species and photographed 45 of them, quite an achievement which was wholly driven by my thirst for completeness. Now I know I'm short by 14 species ( to photograph ) but accepted that given the whole lockdown/covid-19 scenario I think I made a great go of it.

This spring however I have factored in something a little different and that being reptiles, one that escaped me last year was the Adder, but after a bit of research and luck I soon put that to bed with over a dozen individuals spotted amongst the Gorse in just two short afternoon visits with the camera, as time goes on I'm sure the images will get better but these will do for now! 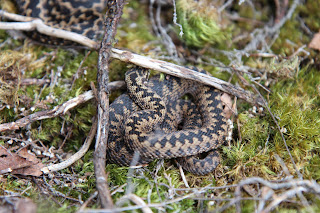 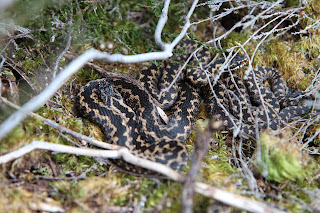 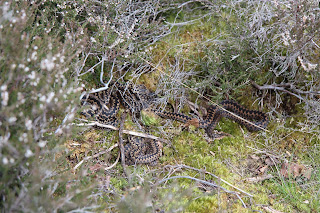 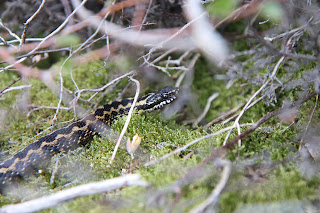 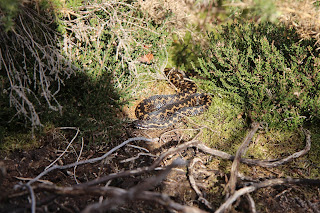 The Butterfly photos will be posted on a separate post this weekend as I hope some of you may find them interesting!