For a little change of scenery I headed off to a different stretch of River Thames after Barbel, but I went there more in hope rather than expectation, nevertheless I was confident I could catch something, as soon as I turned up at the river I noticed that it had hardly dropped and was still pushing through very powerfully and still coloured ( like milk chocolate ).

My tackle for the evening/night was a 12ft feeder rod with a 2.5oz tip, with 9.7lb line, 4oz lead, 10inch 15lb braid hooklink fished with a straight halibut pellet and a small pva bag of free offerings to try and draw fish up from downstream but in such a vast waterway using the smelly baits was probably my only chance of getting fish to my vicinity if they were'nt there already, so I had cast out and now the wait had begun.

During my time on the bank I had been consistently battered by strong winds and drizzle just waiting for maybe one bite that could be my one and only shot of hooking something and a good 3 hours had passed when I was starting to think of changing the bait to a couple of crab and mussle boilies as I have had some Barbel and Chub on the Thames using them and not many on the pellet but the debris coming down was constantly moving even my 4oz lead around the bottom to a point it ended up about 15 foot from where I think I cast it, so I recast to roughly the same position and sat back had a brief conversation on the phone and my rod slammed around with almighty speed, I struck and I was met with a strong resistance and in the current I was doing battle with a big fish by which time it was 730 so it was pitch black, I couldnt see a thing, I put my head torch on and then just waited for the fish to tire, all I could do was hold on and allow it to do whatever it wanted and when it would ease off the gas I'd gain my line back on it.

5 or so minutes later guessing it was a Carp or a Barbel I reached for my net and put in the water just as a large Barbel came to the surface out of the depths, she went in second time of asking with the first attempt spooking her and lunged back for the main flow. I had landed a good Barbel and a fantastic fish to catch of such a dreadful night which made it all worth while, on the mat she looked immaculate and scale perfect with an almighty belly on it, a fish worthy getting soaking wet for.

On the Avon's she went 11lb 9oz a lovely fish to catch and may never had been caught before, after a few minutes reviving in the net she swam off back into the river none the wiser. 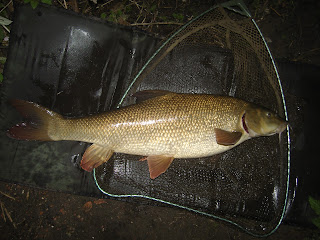 That was the last action of the night I packed up and went home to get warm and dry off, I'll be back for it's parents soon enough. But smiles all around for the long journey back home.
- January 31, 2013