This post was originally posted just before the end of the 2011-2012 season, nothing new added.

This year ive been on form with the captures of specimen sized fish of different species and today it was'nt any different, but starting from the beggining, the session got off to a good start with my first fish being a 4lbs 3oz Chub and was quickly followed by another two Chub slowly getting smaller 3lbs 1oz and 2lbs 14oz, then i got a couple of surprises, one being a Dace and the other a redfin!.

Not beating any records but been a while. 4oz

I used to catch alot of Dace and Roach on this river but over the last 5 years they have all but disappeared and Chub have just ruled supreme, Chub are a good species to fish for but i'd prefer a 20lb bag of Dace-Roach mix anyday, but anyway back to the fishing and the next cast was met with a very forceful dive downstream, so I knew this was a good fish and then it came in like a sack of spuds, 20 seconds of energy.... hmmmm, that's why I love Barbel fishing, when I landed it though I thought I had a 5lb + fish in the net, it looked every bit of 5lb and was very nearly that, at 4lbs 15oz. 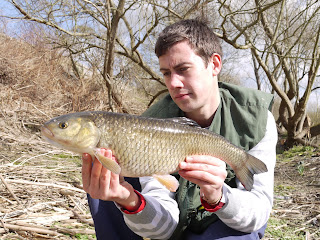 After that Chub I did have another Dace at about 8oz and two more Chub around the 2lb mark, so I headed down stream to carry on the exploit and into my next swim, which was a nice deep hole about 5 feet deep and a big boulder in the middle of the river directing flow either side of the river leaving a massive eddy in the middle and this is where all the fun was, within four casts I had four Chub between 2lbs 11oz and 3lbs 9oz, which was then followed by another Dace about 6oz, then after a bit of a lull for around 20 minutes I just kept feeding maggots into the swim as this was my preffered choice of bait for the day, with the wait over, it was time to cast back out into the eddy and had a take first trot and straight away I saw the fish and I know there are very big Chub here and this was one of them, my river pb was from this swim not so long ago of 5lbs 6oz and this fish looked bigger and after a couple of minutes fighting it was in my net and I could find out if I was right, but before weighing it, I just took a couple of moments to take in the sight of this immense Chub, my biggest ever from this river. 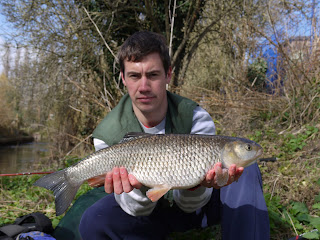 This Chub as far as I know is the biggest Chub from this little system a big acclaim but I've never heard of a Chub this big out of here and I found small article about Chub river records in England and the official Chub record was 5lbs 8oz, 2 thumbs up for me!, but with that amazing fish returned I carried on﻿ fishing and within three casts I was into another fish and it was a Barbel, this was two in two trips now and this one was not as big but what a fantastic fight in the deep water, absolute fun indeed even if it was only 5lbs 11oz, this species of fish is welcome in my net anytime they like, my second Barbel this season. 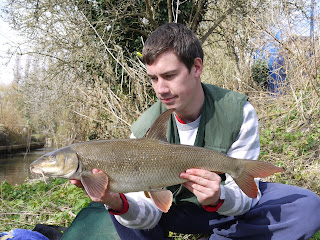 As time was starting to get on I then moved down to the Thames to have a bash at trotting for Bream and did only manage the one, it's been unusually quiet for Bream this year for me, the one i did manage was 4lbs on the dot (not a beast, but it'll do). 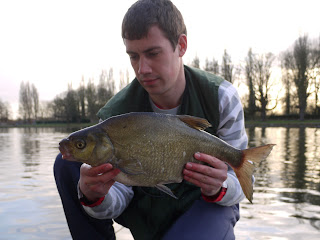 That's probably it for this neck of the woods now for a few month's, hopefully the Bream move back down for Hampton and up from Teddington and the little river gets some more water coming through some parts are far too low. Adios for now.﻿
- June 24, 2013