Still searching for another double

But i did just before dusk on the first session, see 3 Barbel in a shallow gravel hole and were all around the 6 pound mark so decent fish and would'nt have minded any of them, but seems they are not feeding much recently.
- January 28, 2012 1 comment:

First of all, a quick catch up on yesterdays short morning session and i went in search of some nice big fat winter Chub, so i thought i'd start my session at the lower part of the river and take a few slices of bread and a bit of meat and cheese, classic baits for catching these greedy but clever species, trotting meat is a firm favourite of mine because you have total control of where your bait goes and cover alot more water and at this time of year it is very low so deeper spots are normally where they hold up and if you can find them, you can get some good sized Chub and Roach aswell further down.

So first off tryed a lump of bread flake and had a dace about 6oz and the next cast had a nice Chub, it put up a good scrap on the light tackle and when i landed it knew it was going to be another 4lbs + fish and after weighing it at 4lbs on the dot, took a photo and slid her back, after a few more trotts had nothing more so i guess the noise that the Chub may have spooked everything else off, so I headed on up river and had another 2 Chub, at 3lbs 2oz and 2lbs 14oz. 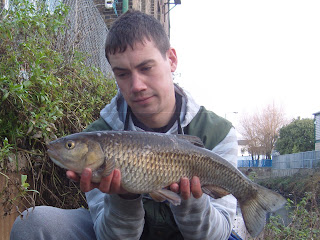 But back to today and went out and tryed the centerpin and trotting rod with some maggots and had a go at the Barbel, the old fashioned way. This for me if i could would be my preffered tackle, maggots are a very under-rated bait for Barbel and i know they can fall for it very often and that appeared to be the case just as dusk was settling in i had a struck into a fish that were'nt a Dace or Chublet, for it stripped line from the centerpin so quickly i could only let it run so i knew straight away it was a Barbel and after a very good fight, slipped it over the net and had my first Barbel from this stretch on the trott, so this was a very good fish to catch and at 7lbs 3oz a great catch indeed. 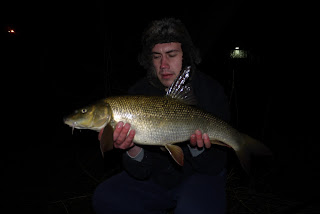 Another fit and chunky Barbel for the ever growing collection, after a couple of pictures and weighing it put her back and then carried on for about half hour through dusk to see if i could maybe have another but unfortunately did'nt manage another Barbel but i did go from the sublime to the ridiculous in the form of the smallest Brown Trout i've ever seen about an inch long, it went for the same 2 maggots i caught the Barbel on, just goes to show that Barbel don't always have to be fished for using 16mm pellets or half a fist sized lump of luncheon meat and also the Trout had eyes bigger than its belly!!!

A couple of past doubles 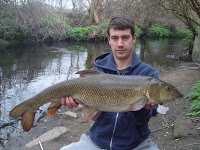 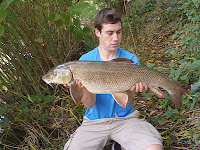 Set out last night in search of ending this dry spell on the Barbel front and having had alot of rain in the morning brought the river level up and also plenty of colour, so the conditions couldnt be better and within 10 minutes, i had a typical wrap around and was in to a Barbel which gave me a very good scrap, which is always a very pleasant thing to experience, sheer power!.

Just before reviving it and slipping her back got a couple of piccy's and weighed it and went 6lbs 2oz of pure muscle, a sight for sore eyes indeed. 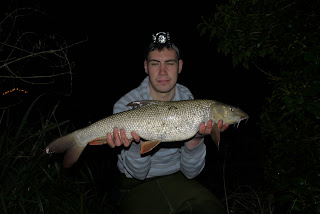 After that i did get quite a few more takes that i couldnt hit so i changed my rig and used a much simplier tactic and within 5 minutes i had a fish on but when it took the bait it charged off differently than how the Barbel usually do and a couple of minutes later managed to land the culprit which turned out to be an 8lbs 3oz Common Carp!!! my first Carp from this river in a very long time, so after doing the honours, slipped it back and went home. 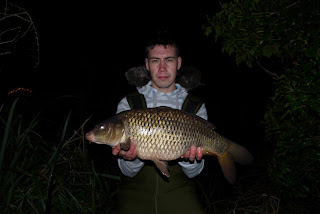 The fish are playing hard!

Its hard going on the river at the moment haven't had a Barbel in 5 trips, maybe its time for a re-think, ive seen a few Barbel in different places that i have not seen them in for years so i think the pressure is moving them to the more obscure swims, even see one as clear as day but couldnt tempt it, 2 night and 3 day sessions and only 1 Chub about 3lbs 10oz.

After a very productive 2011 on the Barbel front i wanted to carry on from where i left off, alot of rain over the last couple of days and the river was flowing up about 2 foot and very coloured, so in position before sunrise and had to ledger to keep the bait in place and after a couple of casts, i had a very confident wrap around of the rod and was in to a very good fish and after the best fight yet off of any Barbel to date, landed a 9lbs 2oz Torpedo, again in very pristine condition, seems to be like 90% + of the stock.

This fish was my 3rd 9lbs + Barbel this season and still 3 months to go!

Carried on with the session and went up river to try another spot to see if i can double my tally and nearly did, within an hour of starting at the new swim got a very strange take and the rod went solid, firstly i thought it was the bottom and then it started to strip line but i couldnt control it, too powerful in the extra water and bumped me off on a snag up-river, never did get to see how big the Barbel was, could have only been a Barbel far too strong to be anything else. 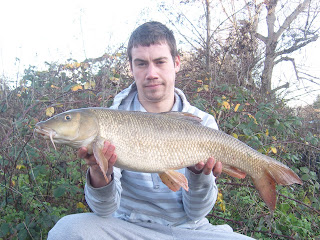