It probably comes as no surprise that I haven't fished much in 2020 so far. A year that has been punctuated by a single catch of chub. Time has been available recently but have struggled to drag myself out and drown a few maggots or sit behind a couple of rods, largely owing to the poor weather conditions, some of it however has been down to me simply not feeling it much, strangely. A notion rarely felt in all these years.

Last week I finally caved, I had to grab some gear and have a trot. The rivers all still up the options were limited. Chub and Dace were ultimately decided upon at the last minute as I made a quick dash to the tackle den and round up what I'd need.

With the car loaded with my Grey's prodigy 12ft tactical float rod, Okuma sheffield 1002 centrepin (loaded with 4.4lb float fish) and a small 5BB float, fished in conjunction with a size 16 hook and white maggots/bread. A quick call to Brian en-route swayed him to decide on a day out rather than keeping the sofa warm at home. First port of call for me whilst I awaited Brian' arrival was a sweeping weir pool where two channels converge and a deep depression under the nearside bank often plays host to some good fishing.

Filled with confidence I started to feed maggots on the crease and began running a float through in the vein hope of picking up a Dace as over the years I have managed some really big specimens to a number of tactics from this exact area. After a dozen trots through the float finally slipped under and I was met with some considerable resistance which was more substantial than I'd expect from a Dace! within seconds the inevitable shape of a brown trout broke the surface as a series of acrobatics kept me entertained before slipping off the hook a foot from the rim.

To tell the truth for the next twenty minutes and countless trots that lost trout seemed to have set a precedent as another two fish (both trout) managed to slip off the hook. Upon the third loss I checked the hook point as it was strange to have such a poor hook-up ratio so early on, but fresh out of the packet it was tack sharp and with that put it simply down to bad luck. A further dozen or so trots through resulted in nothing and with that got myself downstream to try a few more areas that may have fish holding up. 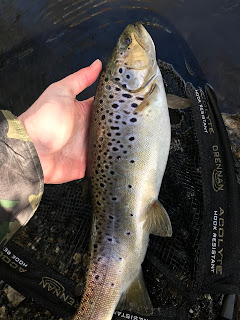 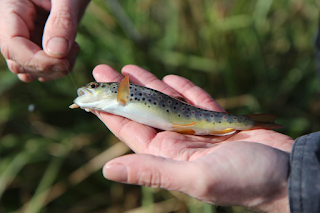 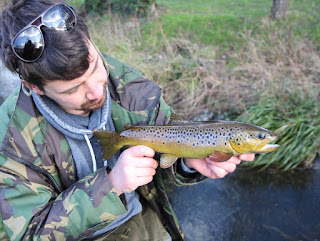 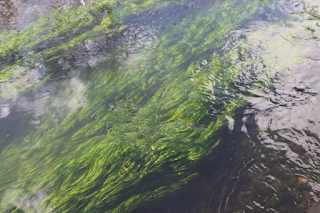 With so much high water of late I guess a lot of fish have been displaced and found this to be consistent with my thinking as glides and depressions that often hold fish were completely empty, with the clarity being as good as it was I didn't have to fish it to know. Finding and catching fish was becoming a struggle!


Apart from the odd trout that I finally managed to keep on the hook it wasn't easy going until I reached the top field where I had a plan to change from the float to a small 25g feeder that I flicked into the margins. It didn't take long for the rod tip to start bouncing before thumping upstream. Within an hour I had managed seven chub to around 2lb and a Barbel of around 4lbs which was something I was not expecting. So all in all it wasn't easy and the Dace yet again have avoided detection and starting to wonder why I can not find them! 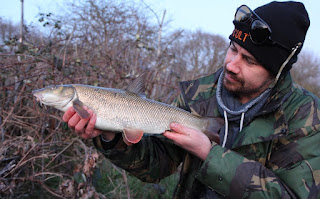