Who'd have thought that by the 16th August that I would have only visited a river five times! it astounds me I'll tell you. However, going by what I have seen and heard in terms of rivers not producing hasn't given me any added impetus to get out. Now, as we enter late Summer and Autumn isn't too far away now I can start to make provisions to target some of my favourite species as it gets cooler and given the cold rain and boost in oxygen coursing through the veins of the river I have decided to give it a go a little earlier than I would normally.

Friday just gone I decided to give it a couple of hours and start my baiting campaign, hopefully one I actually stick with, as normally I run out of steam as I lose concentration when conditions improve for fishing for species such as; Pike, Zander and Grayling.

As dusk approached I set about cutting hopping, hoping to get a bite or two and I did manage a couple of raps (likely to be Chub) and a few indecisive taps as smaller Chub were looking to whittle down my 15mm boilie ( Garlic Nimrod - HookBait Co ) which I am going to use for this campaign when I get the chance to get down, but on this occasion I ended up with a blank, which is quite often what I have come to expect as the numbers in this particular section are low.

Fast forward to yesterday afternoon when I got a few hours down on the river to pick up where I left off.

Conditions again looked good, storms brewing all around me, the level up around 6 inches and heavily coloured, it was ideal for Barbel and Chub. All I needed was a fish to find my bait!

I spent roughly an hour in my first cutout and although I felt confident all I got was the odd little tap-tap on the tip, so I packed away and moved downstream and it was an inspired decision. I quickly leaded around to find a clear run of gravel amongst the weed, I popped the rod down on the tree trunk and turned to grab a handful of 6mm pellet and the rod tip slammed around and the pin roared into action. Talk about right place - right time.

Not a biggie but a fish. 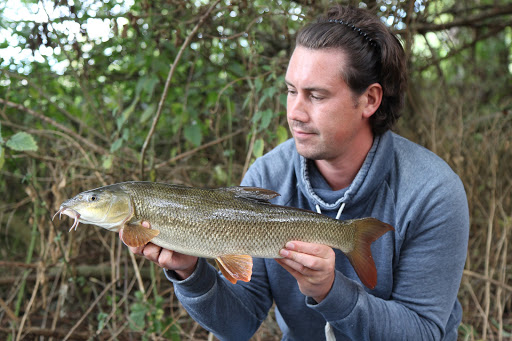 So I moved again further downstream and spent a further hour and a half sat on my hands as small Chub attempted at whittling my bait down. As the storm got overhead and the lightning was flashing at such a rate I felt like I was on the red carpet at a Leicester Sq premier!

But that didn't stop this thick set Chub taking a bait and doing its absolute best to lodge me in a large weed bed that ran parallel to me, not that she looks it but she weighed 5lb 1oz and was quite surprised by it so I weighed it a second time before getting a shot and releasing. 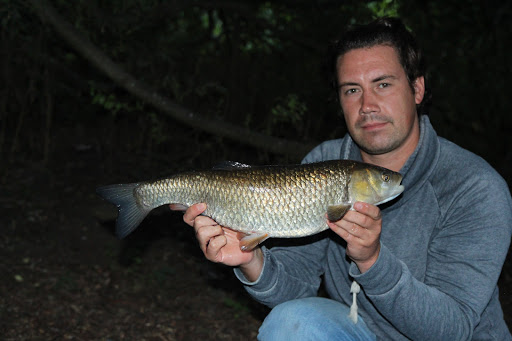 Then as 2100 approached and the storm was dumping loads of rain on me I had another take which resulted in a 5lb 5oz which I didn't get a good photo of owing to the rain and did lose a fish just beforehand in another large bank of weed which was almost certainly a Barbel.

I really hope thats the last of little Barbel as I'm not really here for them, big Chub & Barbel is the target.