Chubbing On My Birthday.


I am thoroughly enjoying my beginning days of fatherhood and what an experience it is too, nobody really tells you what to really expect, for those who read this and aren't parents yet, be prepared for the sense of selfishness to disappear pretty quickly, those who already are parents will probably just sympathise and nod to themselves, it is the best birthday present I could have ever asked for, myself and the good lady are besotted but equally as tired.


As the 7th of October approached the missus suggested I have a morning out fishing and before baby a days fishing wasn't even spoken about, I'd let her know what my plans were and I'd just go, none of that anymore !. I thought as I hadn't been in a few weeks that it would be lovely to get out, but for what? I had numerous targets drifting in and out of favour for a couple of days prior to my escape, in the end I decided to take my 15ft float rod out for a dusting off, Chub were my target for the day. 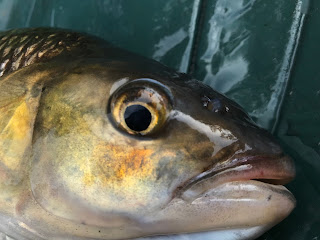 Once the species was chosen the dilemma of where to go then cropped up, did I go for numbers? or specimen fishing, where catching just one of two would have been an achievement?. Quantity it was.

Armed with a loaf of bread, ready to fish by dawn I was prepared for a potential glut of Chub, the outcome could be anything and that was what lured me to target this particular river as I've bagged up numerous "five pound plus" Chub and that in my book is excellent fishing. To begin with a healthy amount of crumb was deposited into the head of the pool, with the intention of the rolling water to distribute the white mist all over and whip up a frenzy. Frenzy it certainly was! on my first trot too!. As my flake had barely got a foot under the surface with my float stiff laying flat on the surface it whipped under! I thought to myself, " it's going to be a good day" and boy was it!


I effectively ploughed my way through Chub after Chub after Chub with the average weighing approximately the 2lb 12oz to 3lb 8oz mark which is great going, a number of low to mid four pound specimens also put up some very spirited scraps on my delicately light trotting gear, there were two noticeably good fish mixed in the hoards that graced my net, the second largest weighing in at 4lb 14oz and then best was clearly well over five pounds at 5lb 6oz which is my best this season so far, although I've not targeted them much this season. I was pleasantly surprised by how well fed the "five" was and that how well it fought, for quite sometime I've debated whether it has the ability to deliver a six pound plus specimen, with this particular fish being as rotund as it was and seemingly young and clean gives me hope that maybe it is possible.


I spent five hours in the water trotting with hardly a trot going by without a fish or an attempt missed, I had clearly got them in a feeding mood and found it so exciting to end up with a bag that probably, based on a law of averages to be over 200lb. 59 Chub came to the net in the end in that flurry and I could have continued fishing too as there was more fish present, just holding behind a massive fallen tree which clearly seemed to hold the entire shoal as I got most of my bites from there, the initial couple of fish came from the pool right under my feet, but as I started to get through the fish they dropped further down the run to the sanctuary of said tree, for me it was a brilliant bit of fishing and with very little time out as you can probably deduce I savoured that for a few days afterwards.
- November 02, 2018 8 comments: