Now I had massive plans for this winter with plenty of plans cemented and targets set, that was until the travel restrictions were put in place to ruin it all. Alone on a bank in the middle of nowhere, travelling at quite times to avoid traffic, travelling on safe routes etc seemed to matter not, so my thoughts of targeting an Itchen, Medway, Kentish Stour and Lea Barbel were all thrown out the window, my only one saving grace is that I'm working a lot around the Colne Valley and what runs through it?

The mighty and hard as nails, River Colne. A river I don't know particularly well but last season managed two in my first visit, both 8lb+, how hard could it be? Early November I went down for my first outing and did half a day in search of a fish, fast forward to the 3rd of March when I finally got a savage wrap that given the fact my rod/s had remained motionless for almost 11 trips I wasn't expecting it but bloody happy I did as I was severely questioning my approach, my timing, my chosen venues, basically everything and knowing the Colne through other avenues I know time is a commodity that is very much required to be successful here, probably more so than many other rivers where Barbel are the chosen target.

So when that Barbel savagely headed downstream I automatically had visions of a huge fish that had evaded capture for years and had achieved biblical proportions and now I was tussling with it, trying to outwit a fish in its own backyard which was littered with numerous downed trees and submerged obstacles to avoid, with plenty of power still clearly on display I tried to get its head up in the torchlight reveal was I was connected to and determine whether I needed to play with more caution or throw it to the wind and mug it! Given the lengths I had gone too to get this far and be connected with one both those thoughts were vying for number one spot.

After a good 3-4 minutes she finally came upstream gently and into view, I have to admit, I thought she was a lot bigger given the show of power, but didn't fight erratically like most Barbel of that size do, my heart did sink a little bit, I thought my target of a Colne double had been achieved, not long after I saw her she was resting in the net and my first Colne Barbel of the season was on the chalkboard. 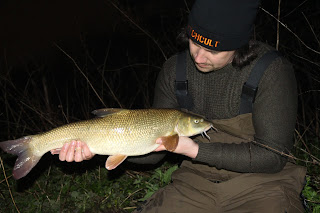 Not the monster I hoped for at 7lb 14oz but a welcome sight for certain. I spent another three trips after that fish for nothing but the occasional quiver, hard work indeed as 14 trips comprised of 64.5 hours of hard graft for 1 Barbel, 1 Bream and a lost Carp to something sharp.

I will be back in the new season with a new sense of vigour and hope to put this difficult river to bed, it will happen, just when....

Time to Search for Silver.

A season bound by endless restriction saw very little angling of note taking place and what with a constant stream of work surrounding my garden and paid work coming in swathes to keep things afloat in the Denison household I had barely found the urge to fish beyond the odd hours after work in search of Barbel. So around valentines day Brian and I took an afternoon off from the mud-pit ( my garden project ) in the hope of finding some Dace as the females begin to put weight on in preparation for spawning around mid-April.
We began by trotting the head waters where sometimes they start to congregate around mid-Feb but after 15 minutes of running the 6g stick float through with a generous lump of bread flake was ignored it was time to get moving, which is strange as late season can often see shoals of 100 fish plus, but recent heavy rains may have displaced the shoal so we headed downstream, fortunately for us we know roughly where they will be and chances of monsters 12oz and over bracket are certainly possible and I have achieved fish over the 1lb barrier from these very swims, so if there was ever a reason to remain focused and fired up for a trip that would be the tonic.
Clear and cold conditions were order of the day and have been very successful when shrouded in mist, low pressure and cold, its something like this just seems to get the Dace feeding, but now after three swims it seemed like they either had other ideas on feeding or we simply hadn't found them. The game of cat and mouse is always a thrilling one and after a good two hours of searching I peeped over a hedge and could see 30-50 fish including Dace, some of which were real corkers and the sense of excitement went through the roof, like a little child unwrapping a desired toy at Christmas, we couldn't wait to get fishing for them and in the crystal clear water we could see them hovering around mid-depth, flashing on the gravel, turning at objects coming down in the water and darting in and out of the numerous beds of ranunculus. This was the chance, so I gave Brian the rod and hoped to be on camera duty for a big Dace..... 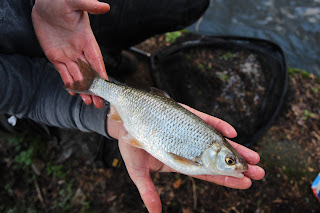 Unfortunately for Brian, Trout and Chub decided to scupper his efforts, but I got lucky with two Dace on the alternate fish, one was around 6oz, then this one which was a welcome sight and a beautiful winter "Silver Dart", praying it didn't come off in the brisk current were answered as I got to cradle another chalkstream beauty. 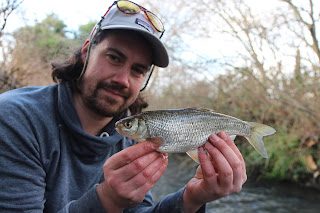 Then as the light failed the mornings rain started to affect the river and clarity was lost and then the fish started switching off. That was it for us, not a bad result for an off-the-cuff afternoon visit. Locally!
- March 20, 2021 9 comments: