Zedvember was upon us once again and the bi-annual pilgrimage to the Coventry Canal was once again underway, a nice early start on a crisp late November morning bought many memories flooding back, memories of some very difficult sessions. Was this to be a case of deja vu? or a bucking of the trend? by 4pm we would have a better idea.

A 3-hour drive up the M1 and M6 was fairly smooth and I couldn't wait to get on the bank. First of all Brian, Rikki and myself dropped into for a quick chat and a cup of tea with Sir Hatt before we went for a wander. The trips up here were to coincide with Jeff's birthday so we'd have a nag or a few hours and an excuse to go fishing, however it always seems to coincide with frosts and the Zander are usually hard to find much to our disappointment. First blood didn't take long though when a small blue job was nailed on the second cast, I lost whatever that was but on the next cast it got hammered again, this time I made no mistake, a pristine canal Esox made its way into the net. 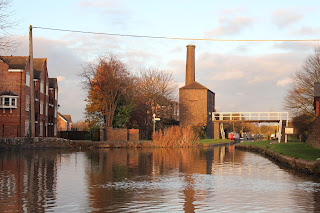 I hoped that was a precursor to some excellent sport, a few hours later and I was still scratching around for another fish. A couple of small Perch slipped up but the Zeds were still very elusive until the very last knockings when I struck a decent hit on a little Perch pattern shad, not big but pleased to finally see one!