Showing posts from January, 2022
Show All

Back on Home Soil. 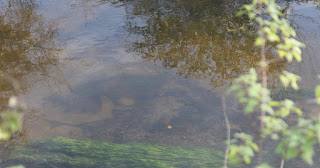 Nothing like home comforts and familiar territory. With my challenge in full swing and learning many other rivers in much shorter spans of time I returned to a river I know better than any other and can always be confident of finding and catching Barbel, even on a cold winters day!  I made a conscious decision to not fish this particular river as it's something I've been and done for 25 years, but seeing as my van was in for MOT and service for the day I could not think of anything better to do than go fishing. I had about a pint of maggots left over from last week so I opted to take the float rod and see if some Dace could be found, problem was, there was about 4 miles of river between my start point and where the Dace reside and within that 4-miles there is a dearth of Barbel areas, most anglers would think, targeting Barbel on 4.4lb Drennan float fish line, size 14 hook and a float rod would be suicide, however I can confirm that played correctly you stand every chance o
6 comments
Read more 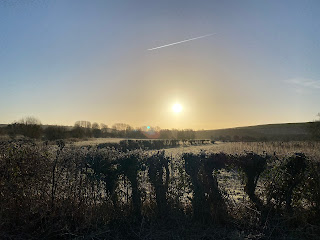 It's been my worst season for Grayling since I began targeting them in 2014, but since Mike had very kindly given me the opportunity to fish the wonderful Wylye deep in Wiltshire' amazing countryside things have gotten a whole lot better. The stamp of fish are clearly a cut above most of the rivers I fish (excluding the Dorset Frome), a number of two-pound specimens have come in two trips (ten to be precise with the best two weighing 2lb 7oz and 2lb 6oz) fish I could only dream of on other rivers I fish, an Itchen two-pound Grayling still eludes me.  As I arrived at the river the temperature was -3c and sunny, just perfect for a spot of Grayling fishing. Oddly though there was quite a bit of colour running through but the river was painfully low and at summer levels which is going to be a major concern for this years summer if there isn't a healthy dollop of rain to top up the aquifers soon. Trotting maggots in coloured water is not normally an issue and fish will find th
8 comments
Read more 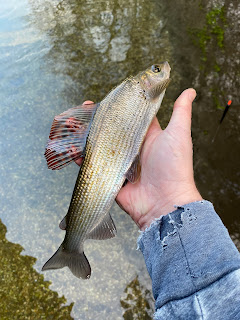 For nearly two years the Itchen Grayling have been put on the back burner, however the conditions were so good I could not ignore them any longer.  A quick phone call to Brian the day before and we were set, but not before we both had a mad morning  searching for maggots, the tackle shop in Bow was shut as I was on early call-out and wasn't close by for the rest of the day and Brian hacked it over to the local Decathlon just to be told they had absolutely none to speak of. It was all beginning to unravel before we had even set off, fortunately I was getting through my diary at a good rate, so I made the journey over to my local tackle shop "Caterham Angling" and picked up 2 pints of red and white....life saver!!   Given the density of my diary my local I thought was right out the window. Anyway, the next morning we set off for the wonderful R.Itchen for a change and not searching for a Barbel which is a nice switch of species because they are annoying the life out of me
4 comments
Read more 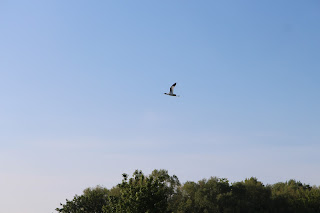 We are blessed to live in such a beautiful country, its a shame most of the 70 million of us don't get to experience it, as an angler I consider myself as one of the lucky ones. I always get asked why I love fishing so much and unless one experiences it in its entirety it is difficult to explain. Just being there sometimes is enough, whether it's in somewhat urban locations or deep in the English countryside.   An Avocet in South London....Very odd indeed. A wonderful Pipistrelle up the same tree I was watching Roach from. A cropped image of my favourite creature, simply stunning. Dorset Frome sunsets are exquisite. Grayling at dawn. Another wonderful sunset. Freezing cold Hampshire Avon dawn. Wool time! Grayling once again. Meet Bill, an angler I've crossed paths with over the years,  got to be firmly in his 80's and still out there braving it! Deer o deer An audience with the ol' Deers Wonderfully clear skies over Nottinghamshire. I'm in!!!! Red Kite soarin
8 comments
Read more
More posts