Over the last few posts I have spoke briefly about my pending visit to one, if not the most historic fisheries in the country and after all the years that I have been fishing I've never made the trip, but the time had come for that to finally happen.

On the Monday we made the trip from London down to Christchurch with a few friends, Jeff snr, his son Jeff jnr and Stu. All excited of the prospect of catching a massive Barbel is always enough to wet any anglers appetite, needless to say the journey went by in a flash and we stopped off at the fishery to drop Jeff jnr off who couldn't resist the temptation, but the rest of us had decided to wait until Tuesday to start our campaign, so we sat and relaxed with Jeff jnr and took in the sights of the picturesque fishery.

Unfortunately the session didn't start off as Jeff jnr had hoped without an inquiry for the remainder of the day, but I'm told that this fishery is not easy going, especially when you don't have the knowledge that the locals have, ie: holding spots of the Barbel, tactics and timing.

Looking up to the Trammels.
﻿ 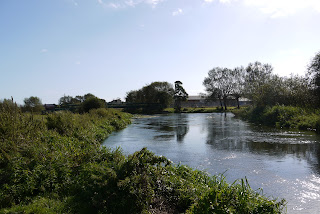 The view down from the Trammels
﻿ 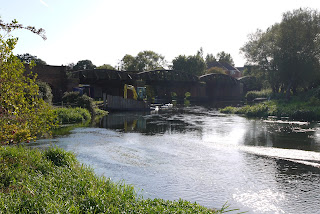 The Railway pool in the distance
﻿ 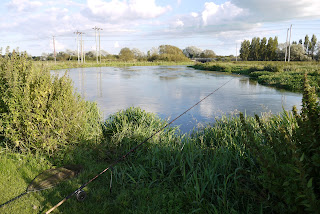 Fishing a spot above the Telegraphs. 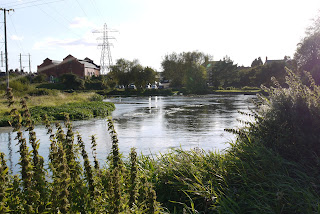 From my swim looking below the Falls.

A new day and we had spent the previous evening fine tuning the rigs and decided where it would be best to spend the day, but I have learnt whilst Barbel fishing that they are a very mobile species so the angler has to be as well to stand a better chance of catching, of course that philosophy isn't adopted by everyone but I strongly believe in it.

During the day I had fished almost every swim on the fishery for large swathes of the day with out seeing a single fish bigger than a Dace, the weed growth gives the fish so much cover and in doing so makes spotting them so hard, unfortunately a few of the swims were closed off due to work on the Railway pool and a couple of swims up and down stream of the railway pool, also a couple of very popular swims were inaccessible due to the extra water, which created a very boggy bank and without waders it wasn't possible to fish which was a shame as they have produced masses of Barbel in the past, but for this inconvenience the anglers were given until an extra hour to fish (9pm), which was perfect for us, as it would be dark and the Barbel would in theory feed more confidently because they don't get fished for that late on and the Barbel know that.

I'd been roving for about 10 hours and not a sniff, I was doing the right things it was the fact the fish are heavily fished for and seen it all before, with dusk fast approaching I had decided to set up in a famous swim and put out a bottom bait and wait for one to come out of the weed and feed. 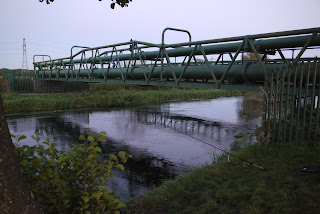 The top of the Pipes, my haunt for the evening, probably the most infamous swim in the country.

So I was in position, hoping that something was on the feed, I laid back and waited, after about 15-20 minutes in the swim, I got an email on my phone which I was looking at when out of the corner of my eye I noticed my night light on my rod tip starting to bounce slightly and then a typical Barbel wrench, throwing my phone to ground and grabbing my rod, I struck into the fish and when I hooked it my heart started to thump and feeling very nervous as my chance of my first Royalty Barbel was on and so soon, but the fight was that of a fish I have not experienced yet, I thought I had hooked the bottom just that it was moving, for the next 17 minutes it slowly took line from my center-pin and ducked and dived between the weed beds and the line pinging off of the weed every time sending horrible thoughts through my mind that it would come off at any time, this was a very slow and calculated fight, the light had failed completely by this time and I couldn't see anything so needless to say I couldn't see the fish, so I didn't know how big it was, I've had many 6-8lb Barbel really scrap but this was in a different league, my arms have never ached so much during a fight.

The fight went on for a long time and when she did finally tire I reached for the net and guided her in first time as she came towards the net I got a glimpse of her but only a flash of the belly, not being able to tell how big it was, a Barbel off of this river was the target regardless of it's size, so when I was in for the biggest shock of my life when I put the rod down and peered over into the net with my torch to see the sheer size of it, I said to my self this,"this is not happening", I could not believe what I had landed, it was the biggest Barbel I have ever seen in real life, with it reviving in the net I rang Stu who swiftly made his way around to my swim to witness it and take some photos and the weighing.

Knowing it was going to slaughter my old personal best we put her on the scales when she turned the dial around on my avon scales to 14lb 6oz a totally immense and unbelievable circumstance had just unraveled and couldn't believe it happened to me. 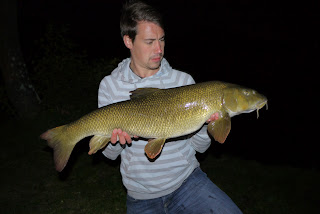 My face was in a state of amazement and shock.

What an experience that I'm sure I'll remember the rest of my life, after a few minutes of reviving her I packed up and joined the rest of the party where word of the capture spread like wildfire much to my delight as a capture of this caliber is not one that is made often.

After a night full of realization of my Royalty dream being fulfilled on the first night I could barely sleep but no wonder why, we all got up and prepared for another day on the bank where I changed my emphasis and decided to get some maggots and trot for some other species of fish.

After roving the banks for the day I had caught a few species including Chub, Dace, Minnows and Bleak, the Perch evaded capture but I'll be back for them some day. 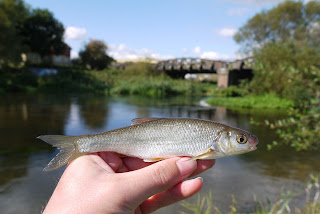 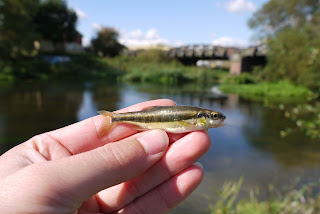 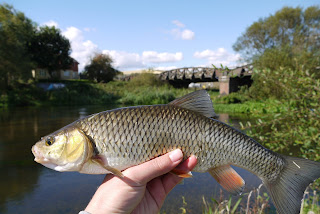 The trotting for the day was good fun and in such lovely scenery as well, as night fell I prepared myself to go back on the bottom to try for another Barbel so I made my way down to the bottom of the Pipes towards Greenbanks. 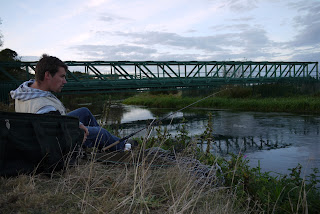 Your host in the Greenbanks.

With dusk approaching I was waiting for an inquiry which did come in the form of another wrenching take that I managed to hit and within 3 or 4 seconds it was gone, the fish must have gone straight into the weed bank that I was fishing and shed the hook, so I knew I was in a good position and recast into the same spot but it wasn't going to happen as 8:45pm approached we packed up and headed back to the car.

Thursday was my rolling meat day and the plan was to rove the whole fishery (the bits you could fish) rolling through every piece of weed to find a Chub or Barbel that was up for feeding and during the day I did struggle to get them out of the vast banks of weed that all of the fish hide in, I resorted to moving up into the Trammels and found a small shoal of Barbel and Chub in one of the middle swims so I sat back and waited until dusk with Jeff jnr just downstream of me in the Trammels, most of the fish caught during the week were all caught from the Trammels apart from the odd fish here and there.

At around 8pm I got a ripping take that I hit and as I did a Salmon or Sea Trout lept out of the water where it must have hit my line, I was so excited for a split second then realised what happened but that does happen quite often I'm told by some of the locals, another day and no fish for the other guys, it was just starting to put into perspective what one fish really means on this fishery.

The Compound (The Great Weir)

We decided to all have a stab at fishing the great weir for the day, so with us all fanned out across the weir complex I did think that the Hayter's side of the weir would be a good place to start. 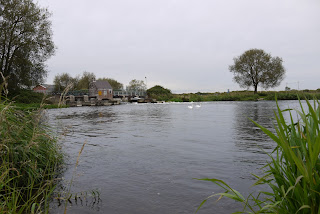 View to the weir. 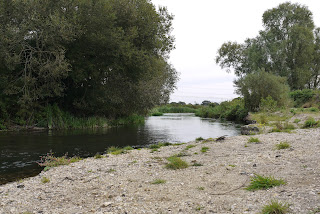 The setup I used was the same that I used when I had the beast on Tuesday evening, fished right out in the middle of the pool in about 6 foot of water I fished pellet with a pva bag with some free offerings to draw them into feeding and after around about an hour I got a take and I was in at first I thought it was a Bream because the fight was quite poor out in the deeper water but when I got it in towards the bank and the shallower water it screamed off around the pools in front of me by which time I knew it was a Barbel and one of my wishes on this trip was to have a Barbel during the day because of the lovely color they take on in the clear chalk water that makes up the Avon. 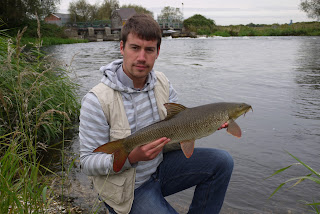 After that fish released the day seemed to pass by without a bite for anyone and again the night fast came upon us and we were fishing into dark hoping for someone to get a bit of action preferably one of the other guys as they had stuck to their task all week and no joy with Jeff jnr losing one of Tuesday in the weed at the top of the Trammels, 8pm came up quick and it was unfortunately time for us to pack up and leave for London, the holiday was over and it was a very relaxing place to be in the heart of the countryside and even though the Jeff jnr & snr and Stu didn't catch it was a nice getaway from the urban sprawl we are used to and to fish a river where fish traverse weirs and gravel bars rather than prams, trolleys and other debris. We will all certainly be back for another go at this pristine fishery, for me, well beating my personal best Barbel is now going to be a mammoth task indeed but I am more than happy with that and I still can't get that silly grin off of my face every time I think about it, Jeff jnr "described it as a look of shock".