It's no secret that I have enjoyed the miniature beasts hunting since last April and I have continued from where I left off. Wanting to photograph Adders, Common Lizards and keep adding to my Butterfly count which will hopefully culminate in collecting images of all 59 of the British Isles species.

I began on 45 species and have since added to that total with the successful tracking down of the "Pearl Boarded Fritillary". It is now time to get a Marsh Fritillary ( Battlesbury in Wiltshire) and Small Pearl Boarded Fritillary ( Park Corner Heath ), plus a better shot of a "Wall", then calculate emergences of different species with fishing trips to kill two birds with some one stone.

Large Heath is Lancashire, Large Blue in the SW, Swallowtail in Norfolk, Large Tortoiseshell in Portland along with the Lulworth Skipper, Black Hairstreak on Epsom Common, then it really starts to get serious in terms of travel.

4 species can only be found up in Scotland and requires a large slice of luck with the weather when making the journey up, but that will be for another time.

Here are some images of the "PBF" and some other butterflies and Lizards/Snakes.

Finally Something to Write About.

I have to be honest, this spring ( if you can call it that ) has been piss poor and find myself constantly wondering when the sun is going to come out. With a failed Tench session under my belt, a 21.3 mile hike across the London canal system for a blank has pretty much summed up my efforts. Not expecting much more I scraped together enough get up and go to get back out for the Tench.

An early start on the roads saw me, Brian and my brother Richard try our luck out once again. Brian and I after tinca' and Rich after Catfish. A nice overcast morning greeted us, if not a little cold still my confidence was still higher than it would have been just a week ago. Cooler water temps than usual for this time of year meant I wasn't looking to put a bed of bait out, more like a sprinkle, if only the swans would leave me alone.....which is rarely ever.

I started out on the feeder to see if a passing fish could be persuaded into picking up a bait, fishing close to a set of pads that were just starting to spread, which is no surprise given the frosts that have only stopped since May 7th. Plenty of ideas were bounded around between us as it became glaringly obvious the fishing was going to be very hard, again. Given our lack of alternatives we decided around 11am to head over to another farm pond to see if the Tench had woken up on there.

But, our hopes of a prolific change in fortunes simply didn't happen, apart from the odd small G.Orfe coming to the net I really struggled, that was until my float dipped and sailed away. Met with more than a  little weight it was clear something else was attached, however in true Golden Orfe style the fight was non-existent and a decent fish of 3lb 5oz rose to the surface and was duly netted, a "bright" moment in an otherwise drab day. 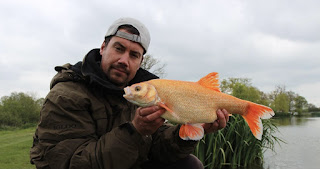 But the Orfe wasn't to steal the day, as we approached 4pm I finally got a few Tench feeding as plumes of bubbles started to come up in their hundreds, having plummeted the depth at 6ft+ I knew there wasn't much room for error. A gentle lift followed by a confident pull under was what I was hoping to see, but after a succession of Orfe coming from a similar depth I was more than hopeful when I finally hit it. A good weight behind it there was no doubt in my mind a Tench was hooked. 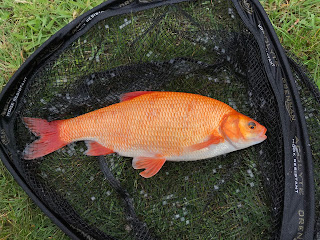 Given the delicate tackle I was using I couldn't bully it so the fight did last a good couple of minutes, zig zagging around the bay, short busting runs for reeds meant I wasn't far off landing it, thats when it popped up. I quickly realised my net was maybe a bit small. 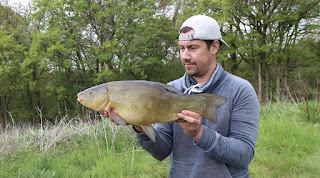 Nevertheless, I did what I could and slipped this old warrior over the rim. Finally, something to be happy about!

7lb 7oz on the Avons, I was certainly a lot happier by this point. But after releasing this gem our day was practically over as my float/feeder rod lay dormant until 1930 when we hot footed it home.

A tough day but very glad I stuck to my guns and gave it the best I could, god spring, hurry up and start!