With yesterday's success on the Rudd front I woke up this morning with a plan of where I was going to try, I wasted no time this morning on getting started with a slice of bread broken and tossed out to seek out the feeding fish and await the swirls to begin, but I saw something I didn't expect as a huge bow-wave broke out in amongst a weed bed, it shot off up and then double backed straight towards and under the bridge I was standing on, I first thought it was a crazy Pike but I had never encountered that before, then as some reeds downstream of the bridge started moving violently and then it revealed itself, in the half light I could make out a large head of an Otter as it popped up to check where I was, still able to see me on the bridge it went under and the bow-wave began again, an Otter on that canal could be devastating and could have a profound effect on such an intimate water, if it was a rogue then hopefully it buggers off but as the day progressed I was catching fish with suspected Otter damage, so I suspect it has been around a while or comes to visit on a regular basis to wreak havoc on the fish stocks.
Upon seeing that Otter I changed direction and headed away from where it was heading with the hope that things had settled down and the Rudd begin their morning munch, below is a piccy of the best I managed at dawn but I did see one a little bigger than my largest.

I maybe had a dozen to 1lb 4oz before breakfast but I couldn't find many larger ones so after brekkie I hatched another plan and hoped it would pay off, 4 miles or so of walking up and down searching for a good one to cast at I had finally done so in the shape of a cracking 1.9 in pristine condition, this was followed up by a string of fish (1.5, 1.5, 1.3 & 1.0) these were all taken in a small section of the canal in very quick succession which was great sport and a bonus Tench on free-lined bread.


And below is a couple of Rudd that were taken later on in the day and through all of the smaller fish I managed to bag myself a 2lb plus specimen and from what I can tell there simply isn't many of them in the canal so I feel very pleased to have snared one on the second day, the other fish weren't bad either as I banked a 1lb 8oz and a 1lb 10oz 2dr.


The largest Rudd really did fight hard and I did think that I'd lose it when it ploughed straight into a bank of weed and when I freed it from there she made a bee-line for the near-side reed line and very nearly did lose it, I scrambled up the bank for the net and mugged the fish before I could lose it, a huge sigh of relief when I looked in the net to see it laying up after what must have been just a tiring for the Rudd as it was me!.


It's been a while since I've wanted to get a start on my Rudd fishing, I did have a half-hearted attempt at Frensham Small Pond after the resident fish but it turned out to be hard work, so to make thing's tougher I decided to head down to Somerset in search of Britain's prettiest species of fish and I sure you would not argue, wild Rudd in beautiful surrounding's.

The weather forecast all last week made bleak reading and thing's weren't turning out well, come yesterday evening the forecast was exactly what I was hoping for, bright sunshine and light wind is my ideal condition's for stalking Rudd and armed with a couple loaves of bread the hunt was on, I began my three-day quest with a stunning fish which was in great nick, after 20 minutes I had one on the bank, but this trip came with a target of a 2lb plus specimen with a 3lb+ fish unlikely but who knows what could happen!.

As the day progressed the larger Rudd were starting to show, between me and my host we began to get some better stamp of fish, here are some of the fish that came to net during my first day on the cut...


The large Dace that I have seen recently and been lucky enough to catch a few of have been flickering through my mind over the last week so I had to satisfy my mind, a forty minute journey completed and I arrived roughly where the fish were last time but I know Dace move in their shoals a hell of a lot, I have never found them in the same place twice and finding them again is not easy as there is plenty of water with the addition of bank to bank weed with only small amounts of gaps but those are the only options.

With the temperature reaching 27c by midday-ish the sport was tough and the Dace weren't feeding hard and I only managed one of 8oz 7dr, not a monster but with the abundance of natural food things are currently tough, as it gets cooler it will improve, plenty of Chub to 4lb 6oz also made an appearance but in the process of coming in to the net ruined the swims with their frolicking, but better than nothing I suppose. 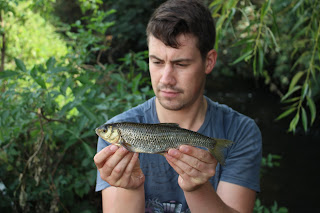 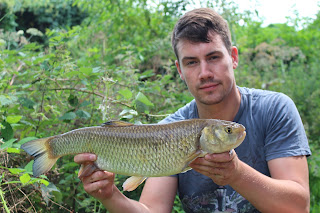 
With my Rudd campaign looking to resume soon I thought about getting amongst some Barbel and with a few little pocket's of spare time knocking about I have been getting myself on the bank and hoping for a wrench or two to mix up my fishing a little.

The other evening with a little rain predicted I set about building a swim and awaiting the fish to turn on, it took longer than I thought it would but a quick move proved pivotal as this slender summer Barbel fell to my BFR, the first of many no doubt and that was quickly followed by another of smaller ilk (5lb or so) but equally as powerful, oh how you miss a good scrap.....

So that evening session was a success and I wanted to get myself back into the swim that had produced previously for me but I had taken my father (James Snr) on a little guided tour for a Barbel with the hope he could manage one of these magnificent fish, size wasn't on the agenda as he doesn't get out much. We started by fishing likely looking areas and allowing a bit of time for fish to move onto our bait's but as we aimed to take a roving approach we quickly scrapped this idea and I thought trotting in these condition's would serve us best.

Using 6BB Avon spigot floats fished at various depths we could get our baits into awkward position's with minimum of fuss, this tactic didn't take long either to provide a fish, a swift take on my rod had me scrambling to get the net prepared when the Barbel finally gave up, on relatively light tackle it put up a good showing. After unhooking and a brief check-up to see if it was okay she bolted off into the deep after reviving in the net.

As I said size wasn't on the agenda and I simply wanted my Dad to get one, but it wasn't his day as I changed tactic again and I connected with a very decent Barbel, with my polarized glasses I could see the fish twist and turn deep in the pool, straight away I could tell it was a double and my heart started pumping hard all I had to do was to stop it from heading for the far bank vegetation and mid-river snags and I was okay, this was easier said than done but after some serious side strain she began to ease up, one last dive for freedom was curtailed early doors and just managed to get her into the net which was followed by a swift fist pump.

Eagerly wanting to know what weight it would go I had the scales out and got a shock when after deducting the net she only registered 10lb 8oz, a frame of a certain eleven but did I care?, did I hell, a lovely fish glowing in the sun on a perfect summer evening, behaving well for a couple of photographs it then returned strong to make somebody else's day, my second double in as many weeks. Very happy with that result and it ended well for my father too a he banked a lovely Chub of 4lb, not a Barbel but a fish all the same.
- August 07, 2015 No comments:

Not Quite To Plan.


It has been a funny week in regards to the weather as it has been up and down like a fiddler's elbow, the fishing has been indifferent and recently I have been thinking of having a short break to allow the systems to sort themselves out, so bearing that in mind I planned on tackling early morning Bream. The 4am alarm sounded and hit the snooze button immediately for I wasn't ready and not enough sleep had been caught, I did finally get out and on the bank for roughly six, when I arrived I was met by drifting weed and a brisk down wind which made fishing extremely difficult, I did attempt to fish it but after just half an hour I knew it was futile so I packed up headed elsewhere.

Thing's looked better upon arrival at my next venue, surrounded by beautiful woodland and not a soul in sight I set about targeting the Tench and Bream that I know are present, both species are known to top 12lb+ and with specimen's like that available it's not hard to see why I really love fishing this lake, at first I was getting a few small pulls under on the float but nothing materialized, with a quick change of bait though saw a brace of lovely Tench fall in quick succession just off a large bunch of lily-pads, the fights were mind bending and very nearly lost both fish on numerous occasions as they seeked the cover of the vast padded area, needless to say they both deserved a well earned rest and laid perfectly still for a nice side-by-side shot. 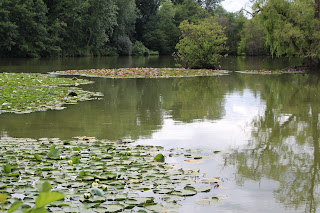 It was rather a quick fire bit of fishing as I remained biteless for nearly an hour before a small Bream of 2lb showed a liking to a small prawn, it was very slow after that and moved a couple of times around the lake but nothing doing, so another change of venue and also change of discipline as I decided to do some long trotting for Dace and Roach, with a slight possibility of an early season Grayling.

I have never fished this stretch before so I really didn't know what to expect and it was set in some picturesque settings, so all I needed was some fish.....after 2 hours of trotting I had a thoroughly wet net with seven lovely Roach to 13oz and around a dozen Dace to an astounding 13oz 7dr, a specimen Dace picked out of a shoal of fish that averaged just 5oz, so I was glad I got my hands on the grand-mother of the bunch, very happy days indeed and another really big Dace to add to my collection.