PB Chub on the Fly.


For roughly five years now I have adopted a light roving approach for wild Brown Trout on a range of flies, this season has been tough and although I haven't been much over the closed season I thought I'd fair slightly better than I have, I think it could be down to a few factors, some of which I can control and others I can't. One thing I have noticed is that there are more fly anglers now than ever before, so competition is stronger for areas to fish and the fish themselves.

On the other hand I have found Chub being a little more obliging on the fly and the other day I managed to tempt my best yet weighing in at 5lb 1oz. The fish was taken on a fluffy brown surface fly and I noticed the Chub sat fairly close to the inside bank and lowered the fly into position where the water erupted as the fly vanished from sight, the fight itself was fairly poor but when I landed it I was surprised to see how immaculate it was considering they've all spawned. 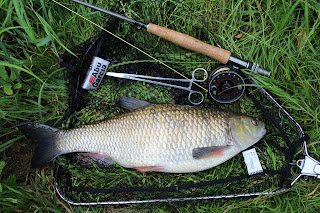