I know this is a little delayed on writing this piece but having spent a lovely and a well needed break in the sun to recharge I am now back with the new river season just a couple of days ahead. I feel I'm almost ready but there was some scores to settle in regards to the canal. A big Carp this year has managed to still evade me but I have located a couple which would smash my canal best of 25.03 set a couple of seasons ago.

Along with the desire to catch another big Carp from the canals I also had designs on some big Bream too, I know they live in these particular sections in a fair number but also surpassing the 10lb barrier which is quite incredible, not something you'd expect, however, I soon enough realised they had just either spawned or were in the process of doing so. I watched them for a while to work out what was happening, when so enough I concluded that they were in the final throws and were back on the feed.

Que the stampede, I was following a few Bream around with the view of winching a bait into ones path close enough that it would spark a reaction, after a dozen attempts my plan worked as a large frame charged my flake and within 30 seconds the job was done.....9lb 0oz ! not bad at all as thus far it is my second largest canal Bream. 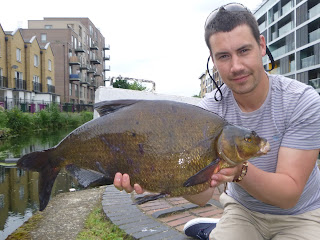 It was astonishing how selective a species like the Bream can be but their greedy nature always lets them down, within half an hour I had finally got a chance at a Carp and not just a small one, I suspect it weighs in excess 28lb but without catching I wouldn't know, finally putting a bait in the right area I hoped it wouldn't take long..... 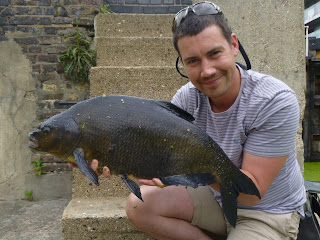 A 8lb 4oz Bream decided it would eat my offering before the Carp could commit, the smile said it all, I wasn't complaining. So after slipping that black Bream back to the swirly depths I stuck it out for the Carp but they did not appear again.
- June 12, 2017