Tutoring the art of Barbel fishing.

After a couple of weeks of not being able to get on the bank due to illness/work I finally managed to wangle an afternoon off and although I'm still not well I couldn't resist a few hours fishing on the river but over the last month or so my youngest brother Chris has been champing at the bit to better his personal best Barbel which is a fairly modest 6lb 12oz caught many years ago, so me being a good eldest brother we got prepared to find a Barbel for him.

Whilst travelling to one of our many local rivers I was going through the basics with Chris in regards to basic watercraft, tackle, bait selection, presentation and if it came down to it, the playing of the fish all of which are important especially if you have forgotten just how powerful Barbel are.

As soon as we turned up to the river we noticed that the leaf fall was still in full swing and the river was littered with leaves making static bait fishing nearly impossible and that left us pretty much with a moving bait method but initially we started on the bottom but quickly discovered that even a 3oz lead in my case was only prolonging the inevitable with 5 minutes of my bait being out my line turned into a washing line and pulled out of position.

For over an hour we persevered in a few swims and we did see a couple of Barbel which did make us feel good about catching one but the leaves looked like they were dictating the state of play, so Chris, Stu and I headed down stream and Chris put on a stick float with a couple of AA shot and a small size 14 hook at around 3-4 foot in depth, I pointed to Chris where he should cast it, right along the creases and work the creases down the run and after doing that about 6 trots he got a perfect take, with the float sliding under very confidently and he struck and a Barbel around 7lb came straight up in the water and held in the current with Chris understandably nervous his chance had come to beat a long standing PB he played it quite cautiously and after a good scrap especially after it saw the net and tired it out she headed straight into the net.

Stu and I both looked at it and knew it was a definite 7lb+ Barbel, so to end the guessing she went 7lb 15oz and a happy Chris then held his prize for some photo's with a grin. 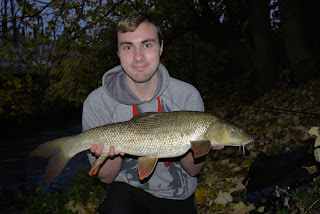 So with that lovely looking Barbel released fighting fit we decided to head down river further and sit up in a slower deeper stretch hoping to avoid the leaves to the most part but unfortunately we didn't manage anymore fish but the objective was to get Chris a new PB Barbel and he succeeded, top fishing shorty.
- November 21, 2012