No Zander in the Cov'.

I'm joining the party fairly late here but better late than never I suppose, after Saturday's fantastic trotting session I was buzzing and I woke up on Sunday at 6am still buzzing, the freezing cold certainly didn't put me off as I was to meet Ricki and Brian at Euston for a jolly up in Coventry on the Cov' canal in search of our usual quarry, Zander.

Now I have been here twice so far and traveled back home with my tail firmly between my legs wondering what went wrong, I was determined to improve on my poor track record for Zed's by using a two-pronged attack.

Once arriving in the town centre we decided to chuck some lures about for a few small jack's but I only managed to watch on, my lures got a couple of little knocks but nothing clear cut, so after casting an hour away or so we hopped into a taxi and joined the angling collective for Jeff Hatt's birthday Zander bash, don't really know what a collective of fishermen is called so I'll go with "Madmen", the condition's weren't ideal but we were there and I wanted to make the most of it, it was great to catch up with some of the guys I haven't seen since last year's meet and fish, but also great to meet up with the likes of Lee, Ben and Keith who I haven't met before but felt I knew them through reading their blogs as they probably felt by meeting myself and the other angler's who they'd yet to meet. 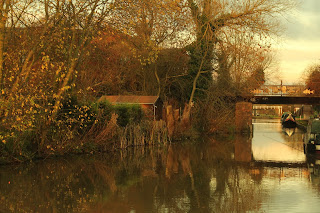 For a majority of the time I spent nattering away to fellow bloggers/anglers about recent ventures and taking plenty of plaudits for this enormous Roach that fell to my trotted maggot/caster combination but I did come down to also banish my canal duck for Zander and I was determined I'd do it on this trip, my sleeper rod was chucked about to try and coax a fish to feed whilst I fished a small 5g jig with various bodies and colour's, the fishing was hard but as dusk was approaching I had a subtle bang which I struck into and a fairly dainty fight played out in the track of the canal, I knew it was a Zander so I really wanted to land it, it wasn't long either before it got mugged and I punched the air which delighted me no end as it was my first Zander on an artificial too.

The rest of the evening was spent trying to bag myself another but a couple of half hearted runs from the Zed's proved to be it and we all retired to the pub for a drink or two.....
Canals zander