Toughing It Out For Tench.


Tench, a species much associated with Spring, the problem is it doesn't feel like Spring as the temperature is reminiscent of winter. The cold NE wind that has remained for a good couple of weeks has affected the water temps which have had a knock on affect on the feeding of the Tench, however cool the weather has been the fingers were too itchy to ignore and planned a trip down south for an overnighter.


24 hour trips and me don't go together, for one I'm far too fidgety to stay in one area and the other I'd feel too much like a Carp boy, but I gave it a bash anyway, I bought myself a JRC stealth x-lite shelter/bivvy for the trip and had great fun in buying the food for a stove which I bought months ago, it was going to happen. In preparation for the trip I boiled up 10 pints of hemp and packed stacks of bait with the hope that the Tench would be very obliging. 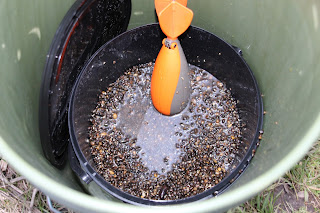 Brian joined me for this trip, both of us were very optimistic and for days previous I was excited like a little child before Christmas. When we arrived after a lovely journey down through the beautiful South Downs the lake sat there glistening in the mottled sunlight as we pulled up, with only one other angler on the lake we had the choice of the entire place and having been here once before last season I had a very slight idea on what to do and wasted no time getting the rods set up and a bed of bait out. 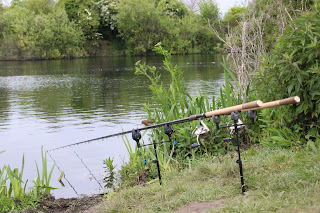 With the traps set it was time to get the camp organised and brand new bivvy stripped out of the box the fun began.....with no manual it was a right pain the bum and after an hour nearly it still wasn't erected properly but it did the business. The occasional bleep would sound as fish moved around the baited area but runs were not materialising. A couple of hours passed before I got a solid take, a one-toner is what I'd been waiting for and I wound down on a heavy fish, clearly I was in contact with a big Tench but I know the weed can be a pain and I was to feel the pain first hand as the fish went solid and after a few seconds the line went slack.

Lost Tench for me was to become the theme as over the next couple of hours up to dusk I lost another two Tench to the weed and it was starting to wear on me, regardless of areas that I was putting my feeders the patches were clear but the Tench were running straight for weed beds and I hadn't the time to get their heads up before they ploughed into the silk weed, then dusk came and the Eels moved in.......


My little setup was cosy and laying under the stars was something I've not done in years, I even had a faff around with my camera on manual settings and play around with the ISO settings, I didn't manage any brilliant photos but it was good fun and picked up what I can only think was the Milky Way. the Eel count got to 3 before I packed it in for the night and caught a couple of hours sleep before dawn in prep' for a mad rush, well I hoped for a mad rush. I was honest with myself experiencing how tough the first 12 hours was I wasn't holding my breath, the fishing was tough and the remaining hours of our trip drifted by with only one more dropped fish, the conditions were not conducive to catching Tench but at least we were in the right places with the right bait, a return is pencilled in for next week where the wind will be blowing from the SW and the sun will be a lot warmer. The experience of the whole camping/fishing lark was great fun along with the cooking, thoroughly enjoyed it even if I failed in catching a Tench.
- May 14, 2017

Email ThisBlogThis!Share to TwitterShare to FacebookShare to Pinterest
Labels: tench