Now when things crop up that you wish wouldn't they often come in three's, I had had my three, what with a lost Zander, a lost Pike (both of which were big) and the damage to my car which some disgusting amoeba caused without as much as a sorry and heres my details....the ideal world that we do not live in, however, the run of bad luck has to end at some point?


You'd think so. Another day on the Saturday (last week) was spent on the tidal Thames in search of a tidal twenty plus Pike and a big river Zander; that didn't happen as I was completely inept at keeping the fish on that I was hooking, roughly eight takes were either dropped or lost during the fights, I was not having a good run of it and the general concesus was that I should bury my head in the silt and wait it out.

Giving up is not in my repertoire, relentless is more of an accurate description of my approach to angling, with almost the sense of a burning injustice the river was calling me to get back on it, with just five baits I headed back out on the Sunday, what with a lye in and all that jazz I got fishing a little later than I'd usually get out. A chilly start made me feel quite confident, although it's not a nailed on to get some action. I had a little walk around first to have a look in a few swims but I found absolutely nothing, lifeless is one of the ways I'd describe what it looked like, though it only takes one moment of magic to change all of that, this time around that magic was the sheer power of a upper double figure Pike smashing your bait and the confetti of scales is all that's left, brutal it maybe there is better way to target Pike successfully (in my relatively short spell targeting predators) than a livey, the natural instinct of a Pike is called upon, even if it is not in a feeding mood.

The excitement was followed by the typical nervousness when the fish on the business end is a good one, that bad luck I eluded to earlier proved it wasn't done with me yet! The rod had a healthy bend in it and was certain the hook hold was solid, not 30-40 seconds into the fight she coughed the bait. My mind just went into meltdown, I couldn't believe it, I clearly owed someone a huge dose of Karma, but for what?, this was getting insane. As I reeled my Chublet in it swam off the treble and disappeared into the vegetation beneath me, oh well, at least it didn't feed off the Pike, on went another and out just upstream of where I lost her, not a few seconds later she came back out and my live bait went berserk but the Pike just stalked it for half a minute before dropping off into the cover.

I had to rethink my approach as I felt my chance had gone by that point, so I went for broke and instead of playing stealth tactics I swung my bait out and it made a decent splash as it broke the surface, immediately after the ripples cleared away from the bait I could see the huge shape sat right behind my live and it was towing the float all over the place, just six inches from the live she charged and with one quick movement my bait vanished and the float bombed under, no mistake this time I leant in hard, I weren't going to screw it up again.

The battle lasted for a few heart stopping minutes before I got the better of her, she slowly cruised into the net at the second time of asking but it was in! get in! the rotten luck was slowly being banished.

Not bad eh! 18lb 3oz and my biggest of the season so far, not bloody bad at all. 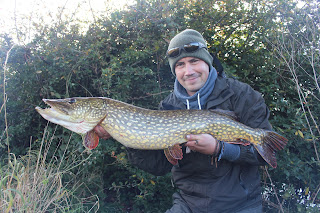 But and this is a massive but, it was only to get better too, what better way to top that? how about something bigger? well, I did manage just that, something of a warrior, boy was it awesome too. Funnily enough though I very nearly overlooked it sat in the near bank shelf, I had seen one in this exact area two years ago and never got a sniff. Even though the river was clear I couldn't see anything, my livey made it was around the river nicely, even managed to tease into areas I thought one would be but nothing, as it made its way to near the end of my visibility the livey kept swimming when all of a sudden the float jerked slightly and I could see the fish panicking a bit but I couldn't see anything until a few seconds later when a massive shape rose off the gravels and stalked my Chublet for a nanosecond before engulfing it! This was a better Pike for sure, that bad luck was being put to bed good and proper.

The fight was pretty awesome, the bend in the rod, brilliant, my mood? greatly improved on the last 24 hours, something had to change, that time was at a little after 3pm on Sunday 19th November. A few more tense minutes was followed by only my second twenty pounder bulging the net, that fish did not want to go in!

As bad was the days were leading up to it, this feeling was as good, just what I needed. Shall we leave it there? 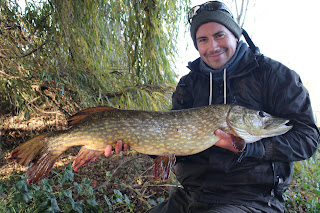 A new personal best at 22lbs 15ozs, just a spectacular specimen, one I nearly never saw, fine margins and all that. I was made happier still that the lives I used made escapes and the one I didn't use went back, both Pike were also caught on my home made traces, the trace that tamed these two has now be decommissioned and in the retired tackle to remember it by, because I'm weird like that.
at November 24, 2017