My fishing over the last 4 weeks has become rather sparse owing to my work schedule packing out with lots of lovely clients happy to splash their hard earned money ( most of them, some born with silver spoons with their mouths ), however, I don't ask where it comes from, just that it's used to top up my funds!. Finding little snippets of time hasn't been easy, yesterday morning I made the effort to get up before the post-dusk disappearing act commenced on the carp front which seems to happen every day since the heat and strong sunlight has dominated.

In truth I haven't had the urge to really get after the carp in the last couple of weeks as dissolved oxygen levels are undoubtedly decreasing everyday as we now enter the fourth week without as much as a drop of rain. The added disadvantage of tired targets due to spawning has wiped out the urge to get on the banks more often as I wait for conditions to become slightly more favourable, hopefully my patience will be rewarded with the capture of some very special fish. 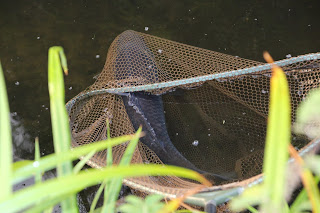 It was that time again to have the car serviced, so with a 9am appointment booked in with the Audi service centre I knew I'd afforded myself with some time on the bank, so thats what I did, 430am and I was already on the bank, ten minutes later I had found two carp, one a koi, the other a dark common, I had them both feeding, successfully got one to take a lump of stret-pegged flake and had it resting up in the net whilst I prepared myself for a couple of photos. Not bad, only small but a proper little character which one day may make a real brute. 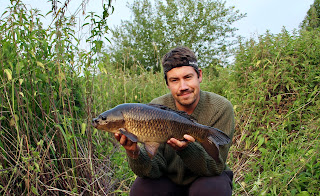 Stret-pegging is a tactic I don't use often unless the swims are fairly slow or offer slacks where I can pin a bait whilst fishing over depth, only trouble is that sometimes when you know a fish is in your swim, this particular time, a carp, is that when the float slowly cocks and shoots under you would expect it to be that fish, however, I got a little surprise in the shape of this fighting fit summer barbel which went berserk in its full blooded attempt at freedom. My Mark IV had other ideas, in the net you go! 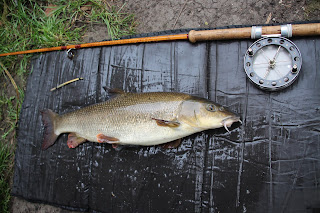 A plume of bubbles with only a carp in view and end up playing and landing a barbel....only me eh.

No threats to my river target on this trip and not likely to be from this particular watercourse but its enjoyable, that is good enough for me.
- July 14, 2018