What a Start to the Decade.


A new decade and a sense of drive to achieve a few milestones that I have put to the back burner seem to be in order, this drive would be directed at carp predominately, especially once spring arrives. However, with the frosts reigning supreme at the moment with the high pressure systems currently overhead it was difficult to decide on what to do on Saturday, in the end I decided upon targeting a carp and if a bite materialised then I'd be happy.

Rewind a week ago and conditions were quite a bit different, wet and squalled days seemed to follow one another with no end in sight. Rivers running over their banks for a few weeks in succession has affected numerous lakes that I may have targeted in order to avoid the swollen rivers. So with the added water in the table it limited my options furthermore, to a degree I contemplated giving the day' planned fishing a swerve entirely. Fortunately for me I know a river that tends to shift water through pretty quickly and with a break in the rain for the night a cunning plan was hatched.

Having loaded up the car with carp gear the night before I spent fifteen emptying it, before packing limited gear which comprised of just the rod, net, mat and a few bits and bobs. My hasty approach to the outing meant I ended up forgetting a few bits that were needed but thankfully most of those weren't going to bite my backside. Just a half pint of maggots was packed and hoped for the very best. Roach were my initial quarry in the pacy glides and deeper depressions as this time of year the females will be looking to put a little extra weight on with April in sight in preparation for spawning.

The idea certainly seemed perfect at the time, strangely this season has been one of whereabouts unknown. I usually have an uncanny knack of finding roach and good ones too, this last twelve months I have struggled. Not even small ones are showing in what is quite often very clear water. With my skill not really accounting for much the decision was made to keep walking downstream, to areas that tend to hold less silverfish, though sometimes bigger specimens can be found floating around in isolated groups.

Roach wouldn't be my only target in these parts as small pods of chub seek refuge in the enormous amount of trees that line both banks, some of these trees have created the ideal habitat for chub. Sneaking out a chub on 5lb line straight through on a link ledger is hairy business, strangely, quite exciting too. A good few hundreds downstream proved fruitless still until I came across a swim a friend of mine had mentioned was holding a couple of chub, sizes unknown at the time it was always possible to hold something decent as the river is currently going through a perceived boom in chub weights.

Twenty-six years on here and five pound fish were and to a degree, still are, rare. A six pound fish is utter poppycock. Well, until this season, five 4's and a 6 by Christmas certainly portrays a story of a river on the up, the question I ask myself is where were these fish? I don't recognise three of the 5's nor the 6lber and I keep an extensive album of chub and barbel caught from this particular river as it is very dear to me and how it over the years has repaid my faith in it to deliver special fish of all species that inhabit it.

With a few chub now in my sights I stood and watched as I planned how I would target them, needless to say I've fished easier places.

Having forgot my polaroids in the van I had to nick Brian' which made him blind to what I was watching. A few sprays of red maggots upstream soon got the chub feeding well and after inexplicably casting into the upstream tree twice a bunch of reds finally made it into the river and as I got my range correct with where the maggots would fall a chub cruised up to them and sucked them in, my 12ft float rod indicated a quick double tap and I struck....but nothing. I missed the bite and god only knows how. The chub on the other hand couldn't care less, the more maggots that went in the keener they seemed to be. The next drop in above the trees didn't disappoint!.

A quick double tap yet again was met with a firm pull on the rod and the chub powered off downstream straight under the trees, my reactions had to be that of a cat, I shot down the bank and  thrust my rod tip under the surface and kept the tension on to try and prevent the fish from wedging me in the branches that were submerged on the outer edges of the trees. At one point the tip was just touching the bottom of the riverbed as I did my very best to keep the line running horizontally to prevent or avoid any contact with the trees. After a good strong tussle I slowly got the better of the chub and it slowly headed towards the net, a decent fish over the five pound mark slowly edged over the rim of the net and after a battle of whits my prize was won.

Before I get to the photo I noticed when I hooked that chub that a few others spooked out and one of them was a real donkey, much bigger than the one I had landed. I knew at that point if I could get them feeding again I could catch something bigger still.

Once the chub had been released downstream I got the maggots trickling in again and hoped to repeat the process. A few minutes passed as I stood watching the odd chub push up along the treeline to pick off maggots when I spotted what I believed to be the bigger chub that I witnessed just a few minutes previous, picking off maggots, darting from side to side and hoovering up what it could find.

When chub are in that mood there is often a good chance of emptying a swim.

I stopped feeding the maggots just so I could get mine out and flicked some more out to get the fish competing again now that my bait was in the mix, ten seconds or so ticked by and in a flash I could see a big fish move over my hook bait. In a split second the rod tip hooped down towards the surface and once again I was sent scrambling down the bank to prevent the chub doing me in the trees (no innuendo intended). Quick as I could the rod tip was way under the surface giving me every chance of success and little by little the chub was slowly coming upstream, not without a fight it has to be said. Powering off out into the main flow the main bulk of the battle was done here, as the whole fish was now visible which made me more nervous.

A few more nervy moments came about ensued as the chub made a couple of last second dashes for the snags in the margins, thankfully for me, my trusty size 16 hook had held well, with the chub now plodding into the vicinity of the net I could now finally begin to relax, with a quick dip of the net she was mine!

Cue the excitement and estimates of what this lump was going to achieve....I was going at rather a  conservative 5lb 12oz and Brian said over six pounds. Now its not hard to see why I'd not talk it up that far, knowing how rare they are, nevertheless when I hoisted her out of the water my estimate felt  quite a way off, built like a breeze block and probably the longest chub I've caught from the system it was threatening my 6lb 2oz specimen I caught just a few months back.

On the digi's it went and a new river personal best, 6lb 3oz. A superb fish that on any river I'd be happy with, from this place? It was worth that of an 8lber off the Lea, Trent etc in terms of equal rareness, in some instances possibly even rarer. I can't stress how minuscule the chances ever were or are to catching such a fish here. Alas now it has happened twice for me and Brian once this season, I can only imagine they have hit a growth spurt among the shoal as they have located a rich food source, one that they hadn't previously, whether it be artificial or natural who knows. I am just chuffed to bits to witness them coming through and who knows what lyes in store for the next twelve months.

Releasing such a fish to fight another day is always a fantastic feeling, lets just hope the revival does continue and that they remain in fine shape.

One more bite further downstream resulted in a smaller chub around 3lb 12oz to bring my tally to 3 for the day and for me that was just fine, a pukka day out and Brian got to witness her too, a fish that I hope will one day push the rivers limits beyond what it already has. What a start to 2020 and the new decade.
at January 20, 2020 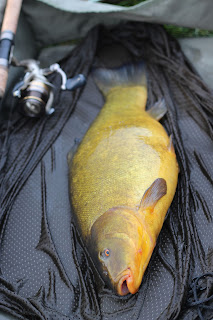