It has to be said, its not on of my best for sure. Targets were set, barring a couple achieved most were missed owing to my lack of time on the bank.

My best six catches here were probably about as good as it got, starting with my canal ventures which culminated in landing a stunning old linear just under 20lb and with a few heart in mouth moments got the chance I needed, not that the Coots and Moorhens read the script!

I was out working as usual and my last job was in Hackney where I normally jump on the A102 south, with the conditions as good as they were I put a few spare hours to good use, with my stalking gear in the van from mid-March onwards the only hurdle tackle wise was to find a shop to get a loaf of bread. Three shops later and twenty minutes used up I set about my task in seeking out a towpath tiger.

I parked up in an area I know only has restrictions up to midday and beyond that it wouldn't cost me anything and could just wander to the canal without worrying about only having one or two hours max stay which gave me freedom of the system. Choosing where to go is often a tough one, previous trips earlier in the spring told me where a few fish were loitering around and normally you can't take that as gospel but in the earlier months they tend not move as much, once the waters begin to warm and spawning is firmly in their minds then they will typically swim 2-8 miles a day, that includes slipping through locks should they be operational.

The wind was light with the occasional breeze and with not a cloud in the sky gave me almost flawless stalking conditions and armed with the most important asset a stalker could need, polaroids, I was in the game. Typically the canal was busy with joggers, walkers, narrow boats and general chatter boxes, as I am forever being asked whether I had caught anything, to which the answer is usually no. The miles clocked up will inevitably give me chances at catching these very wise creatures and seldom caught monsters, some of which have been in the systems possibly longer than I have been alive.

By the time I had probably clocked up 5 miles I finally came across a Carp, in fact two of them. A common and a mirror drifting sub-surface on the search for bugs and seeds gave me the perfect opportunity. Centre track of the canal (easy casting distance for me with minimal gear) these two carp drifted in and then out continuing their search for food, given their confidence in people the nature of my attempts wouldn't seem out of place on the canals. I was able to stand at the edge to allow cyclists and runners go behind me. To start with I got a big lump of crust on a size 8 wide gape hook and waited for two Coots to pass through, annoyingly they sensed free food was on the menu and decided to hang around, making my attempt at the Carp all the more difficult.

Being mindful of many passers-by I had to be extra careful to pick my time impeccably, the birds after twenty minutes seemed to have noticed Gulls getting excited 400 yards or so to my left and the birds hindering me flew off to gorge on the bread buffet, I knew this was my chance, my bait went out and the cast couldn't have been better, no wind, no ripple and......a Moorhen came out of the bushes on the far side who must have been sat on a nest and shot out, straight to my crust! I could not believe it, the Carp were on course for it immediately. In a flash I got the crust in, being careful not to strike anything off to keep it waiting around.

Just before I cast back out I squeezed a big bit of bread and launched it into the cover the Moorhen came from and the plan had its desired effect when the bird shot straight to the cover for the food, before the bird got there I cast my freshly moulded piece of bread out and within half a minute I had the common circling underneath the crust, beginning to shake with excitement the common began to slip away and the mirror followed in behind and eased up to the crust, looking straight at me she gently tilted her body so now the mouth was tantalisingly close to the crust, I could watch it waft backwards and forwards on the surface and the eyes focused on the bait, the carp was no doubt processing whether it was cosher or not, given these are very clever fish.

Possibly the longest minute of my angling life ensued as the mirror then slowly dropped away, only about 6-12 inches but enough to make me think she had worked it out, then out of my left eye I could see the birds to my left had exhausted their latest loot and I was back in the frame. A wave of Gulls were starting to work their way up to me and knew I had very little time left, with the mirror hovering just behind she began to slowly make its way back to the crust, fins giving off subtle little movements as it gained the distance and she opened her mouth just a little, enough for her to suck the now sodden crust between her lips and with the common now completely out of sight there was no competition. The lips slowly closed and with that I put a healthy bend in the rod watched the mirror break the water immediately, then off on a 40 yard run, stripping line off a pretty tight clutch, no room for errors around where boats are concerned.

A towpath tiger was on, a fight I always want to be up for if only I got more chances on such sparsely populated canals. Three powerful surging runs had an audience forming around me and the pressure I guess was on to make this one count, possibly twenty people standing on the grass verge cheering me on, asking questions as I continued my battle and a battle it was!, for over five minutes she did everything possible to escape. Doing what I could, in the end the net was shipped out and the rest as they say, is history, this impossibly stunning canal linear mirror lay resting in the net. 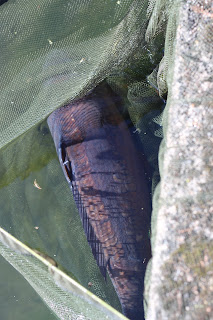 You never know what will be put before you when trying on the canals, I have grown very fond of the task and resilience required to fish such vast bodies of waters, often with no reward! 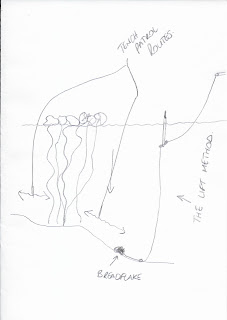