Since 2015 big canal Bream have featured sporadically in a typical calender year, the mileage often put in makes these; and indeed Carp, Pike etc something of a treat to myself, but also if I have gained a few pounds then marching 10-20 miles in a day can often aide the removal of said weight.

Stalking is the only way I target the canals given the nomadic lifestyles the fish live, so efforts must be matched to give myself a chance. My best two "Cut Slabs" have weighed 10lb 1oz and 10lb 3oz, both really big fish, however with the average canal bream weighing no more than a pound or two, these fish and others that I've caught between 7-9lb are colossal and represent a very tiny proportion of the systems populations. Catching one of these is of course a proper treat and an experience that you can't get blasie about, every capture is remembered fondly.

The other afternoon I finished work at a fairly decent time so I grabbed the stalking gear and met Brian on the towpath, in search of something special and it didn't take long either. We stumbled upon a shoal of Bream cruising on the top, so I got readied and launched out a bait in the mix, the bait dropped a couple of inches under the surface and a big Bream sucked in the flake, I struck and missed it!. Damn!

With no time to dwell on the miss, I got the bait back out and hoped for a similar response and what do you know! I did, another big Bream sauntered up to the slowly sinking bait and sucked it in, this time I got a hook hold and the fight began, albeit not very hard. A fairly laid back approach to setting up see me playing the fish between my legs whilst I got the arms in the spreader block, once I got the net in the water I then eased the fish into the net and it was a pretty good one!. 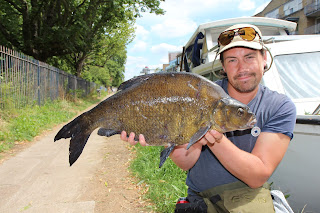 BOSH!!!! another big'o bream'o for the records. 8lb 14oz puts this fish at number 6 in my canal Bream specimen list! Quite impressive.

Once that fish had been photographed and slipped back we aimed at getting more, unluckily for us the boat traffic seemed to come out of nowhere and coupled with the spooked shoal meant that no more were caught from that shoal. So we began the march....

.....that went on for hours, mile after mile of baron towpath started to leave us both feeling a little dejected in some ways. No Bream, No Carp or anything else for that matter were on show, it left me thinking what has happened to the stocks of the above fish. Never struggled to see the fish, just not caught many of them.

As we headed back towards the starting point of the afternoon we spotted two carp, that unfortunately slipped through without getting tracked (wrong light to see through the water) and that was our lot, not a soul spotted after that. The time had come to put an end to the trip.

My second cast of the day was all I needed. Could have gone home after that in hindsight.
- July 24, 2020