Finally we have a summer that everyone can be happy with! That said, the Barbel don't appear to be enjoying it much, in truth I haven't targeted them for about two weeks and haven't caught one in 6 weeks, so with those piss poor returns it was high time that I mixed it up a little.

And what better place to go than the wonderful endless skies of the Fens, a place I hold huge affection for. In the boat or walking the banks it never fails to ignite that intrigue and sense of anticipation not many places can rival. Pristine waterways, overgrown banks in many places means a boat is the only real way to fish effectively and search out big fish that invariably are never targeted.

An afternoon of prep the day before meant I got the chance to scrub my best investment for another tour of the Rudd infested waters of Cambridgeshire and Suffolk, I could not wait. The following morning I awoke at 0315 to finish loading the car and then set off to pick up Brian who of course was as excited as me if not more so given his current predicament, this soiree is just what both of us need and for very different reasons.

By 6am we were at our slip and could already see some decent Rudd so inevitably the excitement level ratcheted up a couple of notches. By 0630 we were afloat and in search of fish, which didn't seem shy at all. Yes catching is the aim of the game but we both had designs on something a little more substantial than 8-14oz bars of gold, even if they looked amazing! 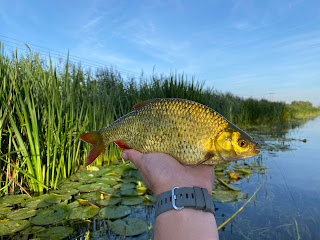 About an hour or so afloat we were making our way up the narrow corridors in search of some bigger fish as a pound seemed to be the threshold to begin with, that was however until we came across a few half decent fish with one almighty beast at the tail of the shoal, it was enormous and the target in my mind is a 3lb+ specimen, I assure you this fish was that and more! If I had to hazard a conservative guess I'd say 3.04 - 3.08, she was massive and immediately we eased up and tried to keep an eye on where she was heading as the shoal had seen us before we saw them, what with ample bankside vegetation and untold pad systems everywhere it very quickly disappeared.

For about 15 minutes we continued to search around for it and fed a couple slices of bread around to try and tempt anything still present into feeding but our efforts were in vein and I feel she either held up in the cover waiting for us to go, or they had pushed on up under cover and we never did see that again, the very fact I had seen a huge fish, the "one" I have sought after for 6 years now on the Fens had been located, I now know its not a pipe dream and that it really is possible!

Notwithstanding the day did pan out nicely as we coasted around in the glorious sunshine for hours, catching fish with the odd bigger one coming to the net until my battery died and I had to resort to rowing instead ( Not so relaxing by this point ). Hundreds of smaller swirls and slurps at the floating crust would be punctuated by a bow wave and smash out of the blue as bigger fish looked to capitalise on the copious amounts of food we pumped out, they really were mopping it up.

Brian did manage quite a few fish but nothing massive, the simple fact we got out on the boat was great, we will be back soon for another bash for sure! Next time we head out I may have a new engine and battery to try out, even more of an excuse to get back up there, it really is heaven and if you are reading this having never fished the Fens I urge you to give it some thought at the very least, its possibly my favourite place to fish, even if it is difficult to locate bigger specimens amongst the hoards of smaller ones.

Tight lines all and be lucky!