Back to the Kentish Stour, Again.

Session 11. Why am I struggling so much on this river? Much like the ColnBrook there is plenty of water but you just can't access most of it for one reason or another. Now I have seen the odd fish on the KS, locating Barbel just seems to be a challenge in itself rather than the catching part. I know many with myself included know that when it comes to Barbel location is 80% of the game, once found typically it is just a matter of time. On this intimate river you would think sightings would be common.

So I got back to it on Sunday afternoon and planned to do the night then the first few hours of daylight.

A single bait approach was opted for and moved swims / sections fairly regularly to give myself plenty of opportunities to see fish. By fish I actually mean Barbel, the Chub were literally everywhere and I found avoiding them very difficult, their very nervy nature when the sound of a plop went in ( couldn't be avoided ) everything would just go dead, funny thing was more often than not I'd fish snags and when those Chub spooked it would take everything out the back, so I got to see exactly what was present and at every occasion, it was just the big rubbery-lipped Chub that were making an appearance, still no Barbel.

I fished all through the night whilst moving around and fishing static boilee with matching paste to hopefully tempt an incredibly guarded Barbel from its watery lair, in turn by midnight I'd only managed 6 Chub to about 4lbs. Just gone half past midnight the rod quivered and then slammed around, was this what I was after? The initial 30-40 seconds would suggest so, then right on cue a decent sized Chub came up to the surface, trying to ditch me in some ribbon weed at the last moment before the net got shipped out and mugged the Skelly before it could smash me up in the weed.

It certainly wasn't a Barbel but I wasn't too displeased as it looked well over 5lb even just hanging down in the net, I set up the camera gear and weigh sling/scales to see what this summer Chub would go. 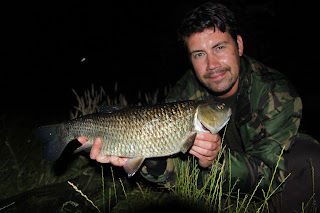 The bite certainly had me fooled and as of 0033 (when I hooked that Chub) three stupid Pike in the morning were taken whilst rolling meat was all I could conjure up. It really was a tough trip, again. 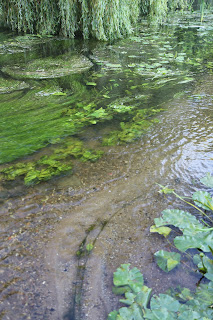