First of all I'd to wish everyone in blogland a Happy New Year and hope it's a prosperous and joyful year for you all.

Now to the fishing, as you can tell from the title I have kicked off 2023 in incredible style, but before I get to that I'll rewind a couple of days to New Years Day evening where I opted to get back on to the grueller that is the R.Loddon in search of a rare Barbel, a fish that I have worked very hard for so far with nothing to show for my efforts.

At home I checked the river levels and could see the gauges rising and knew both the R.Blackwater and R.Loddon would be in flood and well in the fields, what I didn't factor in is that there would only be one spot I could fish on the entire downstream beats of the Blackwater's confluence with the Loddon, so I set up camp and opted to fish one rod upstream and one just downstream both in the margins to avoid the detritus that was coming down, the increased flow is really stirring up the bottom and although good that the gravels are getting a good polishing off it made presentation a challenge. 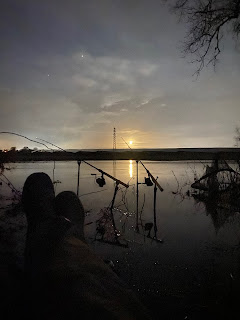 The clear skies gave way to incredible views of the stars, shooting stars and the occasional satellite hurtling above, this wonderful viewing is indicative of being in the countryside and the low levels of light pollution, however I did not come just for the views, I came for a brutal tussle with a monster Loddon Barbel, in fact at the moment I would take a 4lb Barbel right now given the lack of action, the fish are there but I haven't found them and after 10 hrs static fishing completed in that one peg I packed down and went rolling upstream whilst hiding most of the gear in the only bush I could find that wasn't submerged under 2-3ft of floodwater. 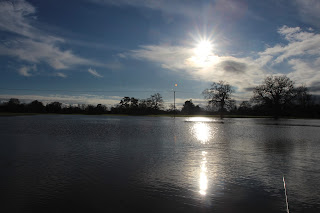 Once I began to roll meat the sense of expectation grew as I am doing what I do best and feel confident that if its going to happen in these conditions it'll happen fairly quickly, the problem is every 10 metres looks like the best Barbel swim you've ever seen! So it makes coverage a challenge.

At 9.1c and slightly dropping river with heavy colour I felt meat would have been the best approach but unfortunately it just didn't happen for me and at 2pm having arrived at 2130 the night before I packed up and headed for home, across the flooded fields back to the car.

Fast forward to yesterday (07/01/23) where I had decided on a change of scenery but not too far from the Loddon. The R.Kennet would play host to me for a day, obviously a double figure Barbel was the target as is the case with such prime conditions for the species.

Having never visited the river I was surprised to see basically a pacy canal! Lined with barges I wasn't sure if I was in the right place but bites came fairly quickly to begin with as I had clearly dropped in on a few of them as both rods showed promising signs of life. I tried to contact a couple of the bites but it was impossible, about an hour after casting I had a more positive bite which showed something was taking a proper interest and after allowing the bite to develop I lifted the rod and away it went, I wasn't sure what had made off downstream with my lump of meat, I hoped for a Barbel but very quickly that hope was dashed as a massive Trout rose to the surface, twisting and turning in the current ( the species wasn't initially determined as Brian and I debated what it was before approaching the net ) Once in the net it was evident that the biggest Brown Trout I have ever seen was laying in my net, not my target but would certainly take that!

It was not a Barbel but a huge fish all the same. Having briefly weighed it for the records and a quick photo she went back to wreak havoc on the small fish populations. Once that Trout had gone back the swim went dead, not even a touch so Brian and I continued on downstream looking to fish everywhere that looked like it would hold a Barbel. In search of fish we did cover some serious ground, 8.2 miles all told for the day which just shows sometimes you have to be mobile to stand a chance, unfortunately for us even all that effort we weren't rewarded and not through the lack of trying.

As dusk was only an hour away we decided to head back up and fish static baits upstream of where we started as we had found a lovely deep gully completely gravel lined with only a little bit of weed so that was where we set up and fished both rods on large lumps of meat. Initially everything was still and the only motion was the wind rattling across the river, but out of the blue I had a couple of little taps that were fairly noticeable in the gusting wind, so I sat guarding the rod but nothing happened for about 15mins.

I recast my downstream rod and felt the lead down, as I was walking back to spot I could hear the clutch on my upstream rod going into meltdown, I then glanced at the rod to see it pivoting on the rod rest with the tip aimed at the water and the butt waving around at chest/head height! The fish that had picked up the bait was in full battle mode and I was late to the party. I thank my lucky stars that the rod hadn't gone for a swim as I would only have myself to blame and prime example why ordinarily I use back rests (grippers), but here I couldn't get them into the bank because it was so hard, getting the front rests in was hard enough in the edge of the bank.

But all that fear of losing the rod was hypothetical as I didn't lose the fish and I was in-fact doing battle with a Barbel, I just couldn't tell how big, it felt heavy but wasn't really giving it the beans, kind of thankful for that too, not long after I was in total control I guided what was clearly a big Barbel straight into an awaiting net that Brian manned expertly! Once she was in I punched the air and shook Brian's hand, that capture has been a very long time in the making. Many years pondering over when to fish it, where to fish, what club/s to join etc, in the end yesterday was the day it all came together, yesterday I caught a River Kennet Barbel....but....it was not just a River Kennet Barbel, it was a double figure Barbel.

For all the blanks it was moments like that that make all that effort worth every minute, the elation is immeasurable when you know how much has gone into the captures.

Once I had allowed the adrenaline to subside I got it together and sorted out the scales, sling etc and we got to work. She registered an extremely pleasing 11lb 12ozs and river number *18* had been achieved, a potentially difficult river chalked off in 9 hours! TO THE PUB!!!!!

What a start to 2023! Special moments in time that won't be forgotten.