Over the last 2 weeks I have been out fishing on a couple of occasions but I have been unsuccessful in my pursuit of some late Autumn Barbel, the sessions have been both during the day and at night but the Barbel have been very difficult this year to locate and when having the leaf fall has made fishing pretty difficult to say the least and a bit tedious at other times but you have to be in it to win it as I keep getting told.

So the plan was to do what I usually do and stay light as possible and move around and find the fish, when you've had a couple of blanks you sometimes think to yourself that, am I doing the right thing or are the fish not feeding or have they all gone on holiday!, but you know the tactic is right and the fish will almost always feed and holiday to where?? 100yrds up or downstream. After assessing that in my head it was time to get to business and my day was to start off on a bad note, to shorten the story a Chub nicked the bait out of a Barbel's gob (about 7/8lb), which I landed at just around the 3lb mark, an hour later, I lost a setup on a snag washed down in one of the spate's, then about 45 minutes after that I hooked a quality Barbel of around 8/9lb, within 2 minutes of hooking it, the swine ploughed through a snag and broke me off! wasn't best pleased to say the least but the day was still young, oh around 15minutes before that happened I lost a Chub when I forgot to slacken off the clutch, what a dope I never managed to do that in all my years of fishing. 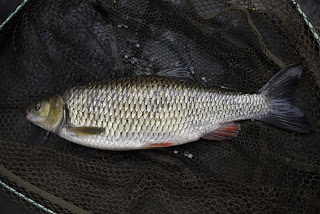 The Barbel bait thief.
﻿
Time for some composure.....Losing that Barbel made me more determined to actually land one I put the rod down for 10minutes and just get it out of the system and moved swim, cast out and after about 10-15 rolls through a couple of still quite weedy runs a Barbel cruised out of the weed and nailed the bait, I did play this one with a bit of calmness and let it hammer around the swim in the added water but making sure I persuaded it to avoid the snags, with it tired I reached for the net and the drought was over, mission nearly impossible achieved, just. 6lb 9oz of lovely late Autumn Barbel. 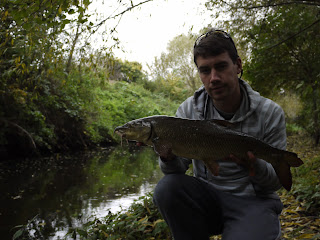 But the drama didn't cease there unfortunately as I carried on fishing to maybe have a go for another not being greedy but felt I deserved it, so my wish came true but unexpectedly it has to be said when I was talking to Stu who had met up with me a while after I had the 6.9, I rolled a bait down a gravel run, I lost sight of my bait momentarily not expecting a Barbel to take it, but one of around 9lb sat there with my bait in its mouth and I felt a little tension then I saw the Barbel rise up in the water and when I saw it was good fish disaster struck, when I started to play it the hook pulled where it must have been very finely lip hooked, it was becoming a day of things I've never done before, as I have never lost 2 Barbel in 1 session and as Stu can vouch for, I wasn't best pleased but who would be??.

I did pack-up a while later as I was deciding whether to go back out for dusk on the bottom using the secret big fish rig, but with another 5 hours of night fishing done and no joy it was home time and with this cold weather coming I doubt the Barbel will feed much until they get used to the cold weather settling in, then it'll be a case of waiting for the mild spells then go after them, I think it is time for some predator fishing now it's turning cold. Esox Lucius watch your backs I'm coming.
- October 27, 2012