This was one of those trips where it could have been hurricane force winds and 5ft of snow and I still would have ventured out, I had one of those feelings that something special was going to happen, call it intuition or just a lucky guess, I was going to make that journey regardless, out of bed at a smidgen past 6am and on the river for a little past 7, the river has risen way up on it's usual winter level and was carrying so much colour for that spells a blank in my books, I didn't realise it had pissed down all night and was raining most of the time that I was out too, my tactic was to bait and wait, not my cup of tea at all but in these condition's it does work.

It was well over an hour of fishing in the same spot and no knocks I thought a change would be good, there was so much debris coming down the river it was causing problems with my bare hook as it kept snagging up on the bottom and also leaves and branches pulling my bait out of position I had had enough, over to the float and put the centrepin to good use for some trotting, I set the float around 6'' over depth so the bait would bounce along the bottom to try and coheres something into feeding, two trots nothing, the third trot down the same happened until it reached the middle of the run and the float stood up and then double backed and headed towards the bank I was fishing, wasting no time I struck and my 2 1/2lb TC rod slammed over, doubled in fact and she rolled on the surface thus briefly showing herself, I became a shivering wreck in a matter of seconds, the fight that ensued made my forearms ache for half an hour after she succumbed, the best fight off a Barbel in a long time, my centrepin was stripping of line on the ratchet so quickly I grabbed the net as I ran down the bank to catch her up, the surge of power is a truly humbling experience, a bloody fish can do that to you. Truly immense indeed.

In the famous words of John Wilson....."Well I never"......well I had no idea that the fish that prized me out of my bed so early in the morning would be this special, I am so lucky, so so lucky. When I finally netted my Barbel I gave Stu a ring to see if he fancied a journey out to take some photo's and he very kindly obliged.

When Stu arrived we weighed her and took a few photo's to savour the moment, a special moment. 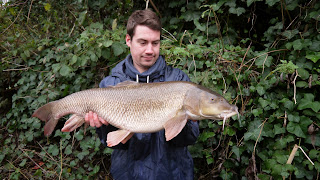 13lb 12oz was the magic number. What a specimen Barbel. 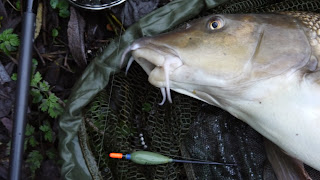 That Barbel was the second biggest of all time, it still hasn't sunk in, boilies pfft, stick with proper baits guys.
- December 21, 2013