Ah, the Dorset Frome, equally as pretty as it is hard most of the time. I, in eight days spent fishing it have never experienced " a good day", infact that's a lie, I had one once upon a time otherwise it seems to either be hard or very hard, not that it dampens my spirit of course as why would it? what other hobby gives a human the need to get out in such brutally cold conditions? I don't think theres many anglers out there that would undertake something as mad, was possibly -5c when we arrived. The Great British countryside in the depths of winter is as beautiful as it is the summer, just without the midges and scores of nettle stings.


It's a long drive down, 2hr and 20 min on a good run or 121 miles each way, before starting off, in the dark of the night I was sifting through my "Angling Compound" for the remaining bits of kit I'd need for the day trip as *it is criminal making such a journey for a day's fishing* ( I have done it in the past ), however, I don't like to waste a good opportunity to get my line wet, two days is better than one! After I'd finished faffing around in the shed and creating all sorts of noise, much to the dislike of my light sleeping neighbours I drove the short journey down the road to pick up the partner in crime.

"We only had one day, criminal isn't it, Nearly 5 hours of driving in one day and 250 miles of driving with 10 hours of fishing sandwiched in the middle".

Once Brian was on board with his tackle we set off for the south-west of England to where they speak of big Grayling, not that we see many of course, we just do it for fun in the vein hope one of us gets lucky or accidentally hooks one in the mouth whilst pretending to fish. It was hard!


Really there wasn't much to elaborate on as bites came very slowly and I honestly tried my best, when we arrived on the river we could see that colour from recent rains hadn't dropped out with possibly 6 inches of extra water still thundering through, fun, especially for Grayling. Luckily one slipped up around 1pm which weighed 1lb 8oz, not before I hooked and landed my first ever Salmon ( around 4-5lbs ), I didn't have the pleasure of weighing it as I was mindful of its duty which lye ahead. 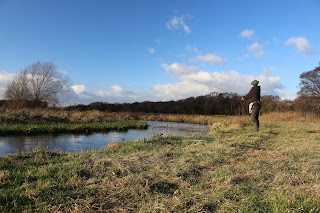 Dusk came quicker than I'd have liked. As both Brian and I were thinking of packing up in preparation for the long journey back my tip twitched momentarily and then tore off as if a Barbel had taken the bait, the pin screeching had my attention rather swiftly. For three or four minutes I was locked into battle with an unseen fish, certainly not a Grayling, too heavy, not a Salmon, not erratic enough, Carp? didn't know there was any in there, having played out in my head what was on the other end the roll of a small Common on the surface revealed all. Little blighter!