Back on the R.Mole again as I look to improve my understanding of the watercourse and how to successfully target a big Barbel. Running murky just about every minute of the year its very difficult to work out where snags, depressions and weed runs are, it does make locating fish just that little bit more difficult.

Having landed a Carp on my second trip I had a couple of spots in mind, however when myself and Brian - who came along for a few hours - arrived, we found the river way, way, way up and pushing through really hard, this gave me another thing to overcome as I'd not had the challenge of 6-8ft of floodwater and over the course of the day continued to rise. With no real pressure, Brian and I had a good catchup as my fishing recently has been predominately after work snap sessions so we haven't had much time on the bank.

Given the extra water I couldn't fish the swims where I thought we stood a chance of a bite so we ended up dropping into a couple of pegs that we fancied as deep sweeping inside bends gave way to shallow (in normal conditions) glides. The rods for the next couple of hours lye completely lifeless with just the odd the bit of debris pinging off the line. After a couple more moves I didn't think much was going to happen but I did have a conversation in a shop earlier fresh in my mind and that was another angler on another ticket stretch had had a 9.11 Barbel out and suggested the river was in fine fettle and prime Barbel conditions.

So I knew that if I could find a fish that they may well be feeding and 45 mins in on another peg my rod finally sprang into life as it slammed round and inexplicably I missed the bite. I couldn't believe it but now camped next to the rod if I got another bite I would be on it, not long after, the bite came. A proper savage bite, with calculated lunges downstream a big powerful fish held steady in the current and for a few minutes I tried to get its head up into the upper layers but all of a sudden the fish just went solid, the sinking feeling of dread settled in straight away and although I tried to remain calm I was shaking so much, I knew just through experience, this was the one I wanted!

For ten minutes I continued to apply pressure in different directions to try and release the fish to continue the battle, but after a while I had admitted defeat. I got downstream of the snag (whatever it was) and pulled gradually down on the snag to release the rig, as the rig parted just above the hook the fish came free and kicked...all the pressure came off, but so had the fish! A few choice words were uttered but nothing could make it right, well apart from getting a bait back out and hope one took pity on my misfortune.

Not long after the rod hooped over again! I couldn't believe it, the fish were found and feeding! the floodwater must have really turned them on. This time around I got the rod up and didn't afford it much space but somehow managed to get parallel with me and once again, the pressure was off and the Barbel was gone, I couldn't believe it, what was I doing wrong and how many snags were in the damn river!!!

My misfortunes did mercifully come to an end as I got yet another bite of cherry, this time not affording the fish any room for manoeuvre at all! Not my target size but my first River Mole Barbel so it was most certainly welcome. 7lb 13oz it was a start!! 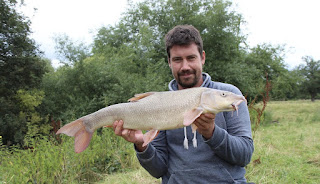 Not long after I released that spooky looking Barbel one more bite did materialise, however once again I hit fresh air and felt I was slightly too hasty this time around. After that botched attempt my chances had all passed me by and the journey home was punctuated by the sense of what could have been.....