Weirdo's, dog pooh, litter and annoying passers by asking if I've caught anything are just some of the main attractions of fishing a very central location in the heart of the capital, the only thing that really keeps me coming back however is the quality of the carp that call this 2 acre lake, home.

Typically I don't spend long here as my tin hat weighs quite a bit and not wearing it results in far to much drivel being listened too and I slowly give up the will to live! Like most visits here its dawn raids and this trip was no different. On the bank to coincide with the dawn chorus I closed my eyes momentarily and pretended I was somewhere in the countryside rather than the urban sprawl. Luckily or not I live close to my work and have a number of places to wet a line.

As the sun began to creep above the tree line and slight mist began to glide across the surface I could make out sets of lips working out at distance as the carp began their early morning scan of the surface to collect any foods that may have been missed or added overnight. For me it was a chance to get a bait out and remain undetected. Remaining mobile with a single rod I followed pods of carp around until the right moment came my way and it didn't take long to get within five yards of a potential target.

Many of the carp here are clued up and know the score, so feeding on the surface in the margins is something they try to avoid but at 20-30 yards its a different story and 15g controller makes short work of that distance!, once out I gently draw it back into the mix and try not to make any sudden movements and do my best not to create any vibrations as I draw my controller back in as that can often push the fish away. No such problems this time mind you. As you could imagine, the sun wasn't high enough to target individual fish so it was a gamble but this typical illustration of what this lake holds was just what the doctor ordered. 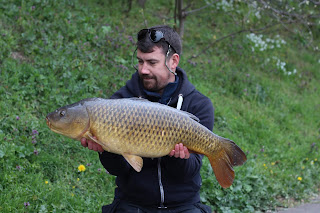 20lb 14oz on the digi' and off the mark, adding to this common did prove a real challenge as that fish really put them on edge and I spent the next 45 mins wandering around before I had to call it quits to get in the motor and head off to my first client of the day.
carp common carp The One Hundred Pound Challenge