Times are changing out there, the leaves are falling by the thousand and with the clocks going back the time to be on the river is sooner in the day which gives me a good chance of coming across a fish or two as these unchallenged fish often slip out of the cover under darkness, although of late that hasn't been factual, weirdly in my last couple of trips the action barring last night has come on the cusp of darkness where enough light has enabled me to spot unsuspecting Barbel on the clear gravels as they clearly have changed tact.

Quite a few short trips have been made over the last month and sport was starting to really slow up, thankfully I seemed to have turned a corner and action has improved to a point where I have managed four Barbel in four trips for combined total of around nine hours, so given the track record down this section I feel that the return is better than I could have expected with the best weighing 9lbs 14ozs, a nice long fish in tip top condition, the others weighing 6lbs 1ozs and two youngsters around 5lbs.

Strangely no Chub have surfaced since mid July and not sure why, I know what will happen now I've said it and they will likely become the scourge of my Barbel fishing. All I have to do now is keep up the momentum and try to keep on the front foot as to the where abouts of the Barbel shoal/s.

As autumn slips into winter I know it'll become tough as it has in the past, knowing where the Barbel feed now should put me in a good position to continue the catching, all I need now is the time. 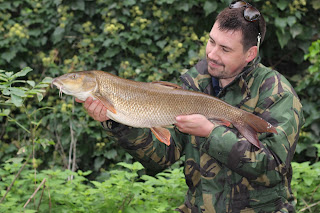 As autumn has settled in I seem to seeing more Owls and Fieldmouse, only too happy to feed the mice they seem to like me and eat just a foot or so from my boot, very cute indeed, last night I was feeding one and my rod tore off after just five minutes with a bait in the water, nice when a plan comes together. 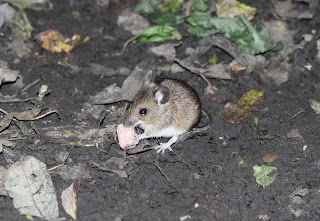