***More Chasing Barbel, but they aren't necessarily the target.***

Building a head of steam on this one, the heat of the summer is slowly but surely being dominated by a distinct autumnal feel and as the late summer floods have thinned out the thick weed beds its now time to dust off the trotting gear.

A few days back as the high water pushed through and colour began to filter out I headed off to a southern chalk stream for a blast at a Chub, armed with a few loaves of bread I set about "crumbing the runs" and trotting through any area that looked worthwhile. 4.4lb line certainly sounds light but have had numerous big Chub fishing lite and often found big Chub shy away from thicker lines and more cruder approaches, with limited time I wanted to make the visit count.

With my first couple of trots through my first peg a small Chub fell to my trotted flake, but at only 2lb not the size I was after, however nice to get one on board quickly. A move upstream provided a bite almost instantly. A firm strike was met with a solid fish and a darn sight heavier than any Chub I could have wished from, by that I knew it was a Barbel and it didn't take long to get eyes on it as she powered upstream past me (a good 25 yards) a certain double, long, thick set and very strong. I tried to keep calm knowing I had very lite gear on for such a fish and about two minutes the fish was level with me and in the blink of an eye the let go of its grip and the float/shot and hook came flying back at me, I was totally dejected and could still see the Barbel holding bottom level with me.

Tough one to take that was! Coupled with what happened next really got under my skin as on the very next trot, two hundreds yards upstream. I got into the cutout and shallowed up my float probably six-inches as it was a slightly shallower run. I must admit I approached this run with slightly more caution owing to the numerous banks of ranunculus and ribbon weed but that still didn't help me when my rod hooped over once striking into a very good tug on the float, the resulting Barbel rolled on the surface immediately and looked colossal ( not one to exaggerate either ) certainly bigger than the one I lost just ten minutes previously possibly 12/13lb, the fish then powered upstream towards after initially heading downstream, it came up so fast I could not keep up with it and by the time I regained complete control she dived into one of the weedbeds I hoped I'd avoid, that mistake on such lite line spelt disaster, a few seconds of solid tension began to ease and out came the fish.

Danger averted! Enough pressure had been kept on her to slowly ease her out, now the fish was into open water and clear of most of the weed, I was beginning to breath a sigh of relief and my mate Stu was starting to get excited as was I, then, out of nothing my float came flying out the water and a giant tail pattern broke the surface as the Barbel stormed off.

On inspection it appeared that the fish must have passed across something sharp on the bottom and cut through the line, the barbless hook will be gone in no time but the memory of losing two massive Barbel on the float stills hurts now, 2 weeks later!

My resolve almost broken and the rod tossed in the bushes following that crushing blow I seriously thought about sacking off the rest of the trip, dejection of the highest order and it would take something very very very special to even paper over the cracks.

I tried my best to remain positive however and within half an hour I had finally managed to build a swim and get some enquiries without being smashed up by a big Barbel. Second fish to make it to the net was another Chub of 4lb 14oz and a good looking fish, then the float slipped away with what turned out to be another Chub a little bigger but over five pound barrier @5lb 3ozs (pictured), quickly followed by another barn-storming tug on the float which turned out to be a nice Barbel, just a little over five pounds. 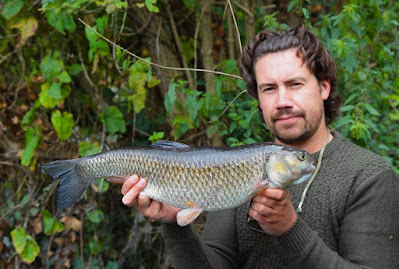 The Chub averages on this river are doing so well and it will hopefully be just a matter of time, yet another five pound specimen and catches like this give me a great feeling. 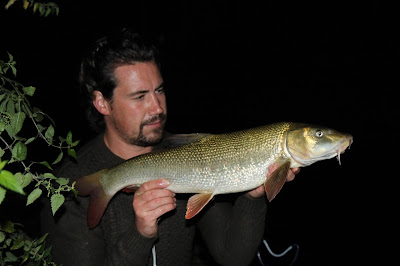