A slightly strange one for me to not disclose the river, but its small and any pressure on there in the short term could really hamper my efforts to locate and catch my double figure target, once I have achieved what I am after then I'll update my blog to reveal the river. The campaign on this diminutive river has begun pretty well, my first visit last week was primarily a wander to get an idea on what to expect and my second visit yesterday was to roll meat in the still murky water to search out a fish.

That plan to search out a fish worked wonders, within half an hour the rod hooped over with a small common carp in tow which unfortunately slipped the hook, having seen it was a carp I wasn't too annoyed. That loss was followed by two very sharp tugs on the tip that I missed, somewhat by surprise as I was holding the rod both times, however the bite that really mattered came around an hour into my visit and the bite was just what I expect from a Barbel; savage, violent, brutal and what other adjectives you want to use!

Thankfully after a short weedy battle my first Barbel from this small river was in the bag, 7lb 8oz, not much more I could ask for really given the fact I've barely scratched the surface and already got a respectable sized fish on the scorecard! Let's hope that Barbel isn't too far away!! 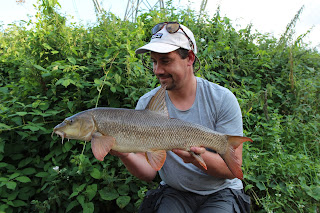