Well what can I say! It's been a tough few months on the Barbel front, eleven trips since my R.Ivel double back in late September has resulted in just the odd Chub and yesterday evening I thought it was going to be a case of deja vu as I slipped a solid looking 4lb 15oz Chevin into the net. With the Lea in flood, pumping through, looking like milky tea and along with the water temp up at 9.1c upon arrival it just had to produce a Barbel, end of December and unseasonably mild it was 'thee' perfect condition to fish for winter Bertie. 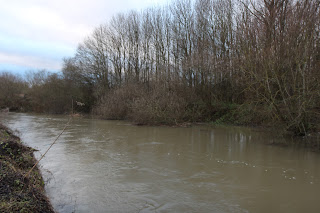 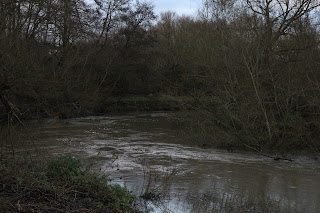 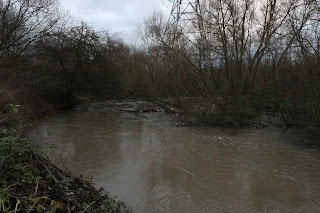 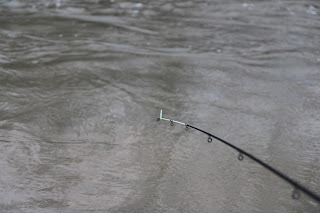 Moving around the river, I gave each peg forty minutes or so to get a bite, typically in these conditions I would expect to drop on fish getting out of the turbulent waters, where food would also collect in the eddy's making life a little easier for the fish. My tactic was to feeder fish worm with crushed hemp and micro pellet in the 5oz feeder to hold bottom, plenty of loose debris was coming down in the main flow so I opted to fish the inside of any creases I could find, problem was there were too many excellent looking runs and not enough time.

But, just when I thought it wasn't going to happen in probably my 6th swim I got savage take that nearly took the rod off the rest, I was in no doubt it was a Barbel, armed with fairly stout tackle I opted to allow the fish to hold out in the flow where she hugged the bottom, powered upstream and downstream for a good few minutes, owing to the murky water I hadn't actually seen the fish I was playing until she sailed in over the lip of the net. In the torchlight it looked like I had managed my R.Lea double and not long after that was confirmed, river number 11 chalked off of my list and my 6th different river double of the season!

She was a tough nut to crack but worth every bit of effort and every minute spent in M25 traffic and queues! On the scales she went 10lb 5ozs and my task on the Lea is complete.