Fishing has been a little thin on the ground of late, I have managed a couple of shorts sessions out for Barbel with no joy which is hardly surprising given the venues I've been targeting, no joy in the summer I don't expect it to be any easier in the cool of winter. I know double Barbel exist and I also know there aren't many around so the task set out for a R.ColnBrook double is going to be possibly one of my toughest foes.

On the stick and pin the other day I had a good morning where I choose a peg that had a decent inside slack behind a fallen tree and on close inspection a few days before I could see silvers turning on the gravel, so I knew that would be a good place to start my Dace fishing. Once valentines day is out the way Dace are firmly in my plans as the Hens start to gather with spawning in mind around early April. The window of opportunity looked to be quite short on Saturday too as the stiff winds looked to return, bringing with it heavy rain for about 4 hours in the middle of the day.

So once I got in to the peg I began feeding white maggots every 30 seconds for around 5 minutes before my first trot and fish came from the off. A couple of small chub and moderately sized roach slipped into the net early doors where I then had to continually alter the depth I was fishing at to keep the bites coming, also at times I needed to rest the swim and keep feeding as bites did at times dry up, this tactic worked wonders and enabled me in the end to amass a bag weighing 13lb 7oz of quality Roach, 1x Dace (8oz), 1x Rudd and a couple of small Chub. 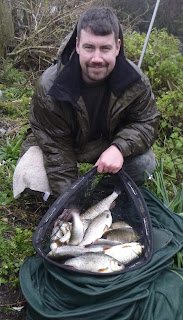 Then the rains came which shifted the water level up quite rapidly, losing my spot where I was standing to get my trots in thus having to weigh in and move. Unfortunately for me the river everywhere just became unfishable and with the water table already full the levels increased faster than I'd anticipated, but not a bad couple of hours to start with, I will be back at least a couple of times, I haven't had a monster Dace now for a couple of seasons. A pound plus fish is certainly a possibility, it has previous, so I must keep trying!
- February 24, 2022