As we approach the final throws of the 2021/22 season I am almost at a point in time when I reflect on what I have achieved over the past twelve months and on the Barbel front it has been a real mix of highs and lows, tough blanks on certain rivers and total elation on others, it has been brilliant overall and if you had told me I would have caught double figure Barbel from six different rivers this season to put me on 11 out of 40 I'd bitten your arm off for that.

So, I have had an eye on the last week of the season for a proper blow-out and see if I could potentially add another fish to my challenge and having looked at my options, the current forecast I thought that the Warks Avon would be in good nick and a few messages with George Burton of Float, flight and Flannel over the course of the week we decided on a visit on Saturday and I could not wait as it was to be my first ever visit to the river and it couldn't come quick enough.

2hrs up to the midlands was chalked off and finally I was bank-side with George and after a leisurely chat and set-up I got the static rod out which was rigged up using a 2oz gripper lead to keep my rather basic rig in position in the main flow, the rig consisted of a size 6 Korda wide gape XX hook, tied to 12lb Fox Illusion (1.5ft length) and a size 8 swivel, the bait was a lump of Spam and a PVA bag with small cubes of meat to hopefully create a large scent trail and try to woo a Barbel into feeding at some point during the day. 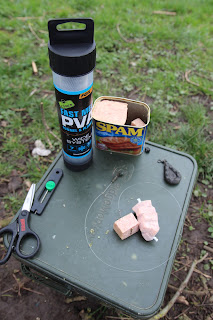 With the other rod I decided to roll meat and work the area immediately upstream and run it down towards my static bait, on my first couple of rolls nothing materialised but that all changed on the next roll when half way down I got a swift bang on my finger but not enough on it to connect with, too quick! I followed the roll through with no return and the next run through halfway I had to throw the rod into the bush as my static rod double tapped and then slammed around with a peeling clutch! I was on it in a flash and instantly I knew it was a good Barbel. In the deep water I played the fish slowly and giving it what it wanted within reason, my legs were wobbling all over the gaff and my heart rate doubled as I was trying to picture what it might be on the other end, I knew what I wanted to be, but was I going to get that lucky?

Then she surfaced like a breaching submarine, at that moment I knew I was connected with my target fish, as quickly as she appeared out of the murk she vanished again, nicking 25 yards of line off the spool in no time at all and I had to slacken off the clutch quickly as I could have lost her such was the power of the run which she actually made twice before the signs of tiredness began to show, I was impressed by the power and even more impressed when I saw her lying in the bottom of my net! I knew she was a double so I called George to come and have a look, to which I was met by surprise! I was warned that it could be a long day or two.....51 minutes is all it took. Incredible how sometimes those golden plums shine when so often I'm kicked in them.

George did the honours with the photographs and we weighed her at 12lb 6ozs, a Warks Avon double within an hour of starting my quest on the river and river number 12 of my challenge completed, I was stunned and what a beautiful Barbel she was too!

If Carlsberg did trips on the WA!.....Well, to be quite frank, it got even better with what happened next.

Relatively speaking this capture is bigger than the Barbel in terms of the river, rather a personal achievement.

Half an hour roughly after releasing that superb Barbel I had another take on the static rod and a powerful fish quickly lunged downstream taking a fair bit of line, straight away I thought Barbel, plenty of power and stayed middle of the river hanging low to the bottom, so after about 2 mins you could imagine my face when I saw a large Chub surface and roll straight back down to the bottom, this fish clearly didn't read the "How to fight like a Chub" book!

Sure enough after another minute or so I was calling George again to come and have a look at a 6lb 3ozs Chub that by Warks Avon standards is massive! I couldn't quite believe the morning I was having, George was speechless and knowing how rare these are here I felt honoured to have fluked it out!

That was not in the script and to be fair, nor was the Barbel, having been filled in with the details as to how difficult the river can be I guess all the struggles I've had this was a reward for sticking with the fishing in less than favourable conditions over the winter.

That was not expected and by midday George left to attend to matters elsewhere so I took the opportunity to drive out to the Severn and look to continue my run of form that I was clearly on, a quick 45 min drive saw me driving through the Worcestershire countryside and my first sight of the river was about half mile from the river itself, the road leading down to the actual watercourse was marooned by floodwater, quite a sight and it wasn't long ago when the river wasn't fishable as it started up at the main road! Thankfully for me it was nearly back within its banks although pushing really hard I opted to fish the slacks. 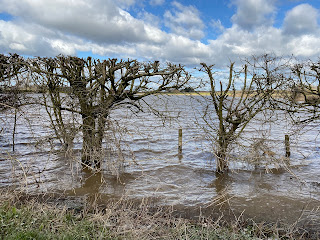 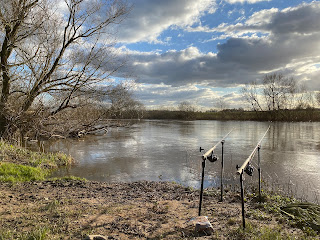 I decided to drop straight into a peg with a large inside slack and where my 4oz feeders could hold bottom, amazingly even on the crease 7oz gripper was swept straight into margins, it was running hard and fast, that however didn't bother me, it was the water temp that didn't fill me with any confidence at a measly sub 6c, but having made the effort I stuck it out until kicking off time without a tap ( I wasn't surprised ) so I weighed up my options and in the end decided to back east to the River Bourne where I have heard of the odd recent rumour of big Barbel smashing Roach anglers up, it was time for me to improve upon my summer 7lb 8ozs Barbel and get something bigger.
I arrived after a 97mile journey across Worcestershire, Wiltshire, Hampshire and into Surrey to find a very pacy river and carrying lots of colour still after recent rains, again, much like the Severn it was the water temp that I was a little concerned at which measured 6.1c, not ideal but I suspect its been that for sometime and hoped given my recently acquired knowledge of the river that I'd get some action, then three hours slipped by without incident and had decided to save the peg I thought would produce until last thinking I would come across something, unfortunately I got to 0130 and decided it wasn't going to happen so I buggered off home, cutting my trip a day short as I planned to be out until Sunday evening, oh well, I chalked off another river and could not have been happier with my start to the last week of the season.
- March 06, 2022