My bi-annual visit for Catfish was booked, plenty of discussion had about tactics etc which once all played out was pretty mute, they eat anything, on the surface, on the bottom and anywhere in between!, If re-incarnation was a thing, the humble slug would be my next life form, we do share that trait.

Nothing special, only fish to 60lbs floating about in small numbers which were most likely guarding nests by this point, so we knew the size of the fish would be impacted by this but did we care? not one bit! my good chum Brian unfortunately received some terrible news recently and saw this trip as a blow-out before he is relegated to the sidelines as he takes on his battle with the dreaded C! 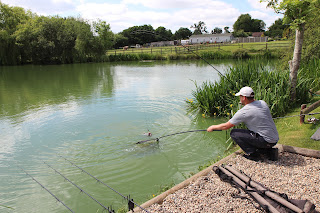 A friendly competition as always is good but when we do this catfish fishing we build a joint tally and try to reach certain targets but this time around it was fairly clear from the off that we didn't have massive numbers of fish in front us and that other pegs on the other side of the lake were fairing far better than us, but what can you do! We set out our stall and stuck to the game plan.

36hours was booked and hoped we would see at least PB fall whilst there. Brian' best is 30lb 3ozs, Richard (Bro's) 33lb 10ozs, Richard B 35lbs and finally mine at 39lb 9ozs. All fairly respectable weights without really fishing anywhere (barring a blank at Swallow Pool two years back) where monster fish are present. Knowing Charlie's in Ashford does hold fish over 60lb meant we do stand a chance of adding a fair chunk to our PB's, if we could find one.

That however in the blaring sun was not easy and found sport very slow, in-fact combined it took us well over 12hrs to get over 10 fish combined, that really was slow and fish weren't of decent sizes either, I lost a big fish that gave me the slip in some pads and Brian lost an equally decent fish to a hook-pull, not what we wanted but part and parcel with fishing. Meat was clearly the bait of choice and all but the odd fish falling to boilee and paste, it helped bolster our takings.

When these fish do go it is great fun and fights often last 5-10 minutes, especially when the battle isn't nipped in early and they get a second wind, it can be good fun with the added jeopardy of being given the slip as they know where the snags are and found them often charging 50-70 yards to far margins in search of cover, thankfully fishing decent gear they often didn't get close enough, but the battles are good fun.

Over the 30 hours that we fished the scores were in and as we wrapped things up Brian slipped in to first with fish of the trip....written in the stars some might say! I shall let Brian fill you in with the details through his blog here: Pike Blog Nicely done mate!

The scores were as follows:

All in all, good craic and must do it again, but maybe go for something a little bit more serious once Brian has come out the other side!

Email ThisBlogThis!Share to TwitterShare to FacebookShare to Pinterest
Labels: Catfish