This afternoon I had a couple of spare hours, which for a Sunday is quite unusual, I was accompanied by my father for the short session. Initially we thought a little species hunt would be a good bit of fun but the time and conditions were against us so we decided otherwise and my father went off in search of Chub and I, well naturally I targeted the Dace.
The distinct lack of rain in these parts has affected the levels here, so some runs were severely low in water and hardly any pace, this made swim selection difficult but not impossible. For Dace though I am certainly in the groove and this afternoon I landed another large specimen of 14.4oz, this one certainly looked as if it had been through the wars a little, chunk taken out of it and a dis-organised scale pattern. Character.

I did continue but only a couple of bites followed which I didn't connect with, it seems strange that the runs go dead after very little activity, my only conclusion is that I'm only catching the occasional fish that is feeding but the shoal aren't switched on, I use a keep-net so what I catch isn't going back to piss off the remaining Dace and I know they're not pressured for a fact. Since I couldn't get any more Dace my attentions turned to Roach with a few spots in mind on the way home I bagged myself a plump male covered in spawning tubicals of a pound or so, the Roach are preparing to create the next generation. 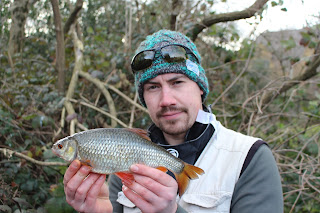