In Search of Monster Chub: Part One.


Chub. A species I have burning desires of catching in their most impressive form. 7lb and above is the ultimate goal for this species, locating a river capable of such a feat is hard enough and possibly could count them on two-hands, but one of those rivers that has a proven track record for such immense specimen's is of course the Stour. With the Stour being Dorset's premier river the Chub are probably the most prolific species throughout it's 60 miles from source to sea. 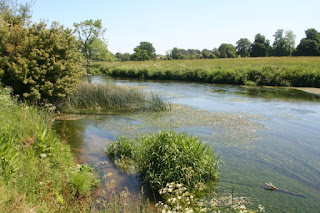 For those who have not had the pleasure of fishing it are missing out, it is a lovely river set in beautiful surroundings, my only problem is that barring the last trip I've managed to hit the river when it's been up 4-10ft and rafts of debris coming down the size of houses, fishing in those condition's with little knowledge of what's below the surface is very tough indeed, needless to say I blanked for Chub on all those sessions. Learning the hard way is often the best, but those sessions were from last season and consigned to the past, this season I have my relentless hat firmly in place and between the Fenland Rudd and here I have two distinct objectives, first of all, to achieve my challenges that I've set myself and secondly, most importantly is to enjoy every single minute for that is what fishing is about.

Exactly where I'll be fishing will be impossible to pin down as the condition's will possibly dictate where I'll try for a big-rubber-lipped Chevin, tactics will vary too and likely to swap between various methods in pursuit of a hat full on every visit, a 208 mile round trip is quite an undertaking but worth it. I have visited already once this season, the evening before I phoned Tom Aldous who is an avid Chub angler for a trip to the Stour, seeing as he lives en-route to Dorset that it would be good for him to get out in glorious countryside.


Tactics were different as I opted for a very mobile approach whereas Tom looked to get a shoal of Chub feeding and take them on a hair rigged bait, for daytime Chub fishing I always like to move around but everyone is different, it was interesting to see how the varying tactics worked during the course of the day. I didn't fish until I was spotting fish with the polaroid's, some areas were empty but shoals of large Chub are never far away and it just takes patience and guile to outwit them, so with that knowledge I managed to get fish in three separate areas feeding, managing two out of each swim was a major step in the right direction, the average weight being around the 4.8-4.12 mark was pretty good but the largest which was the final fish as dusk settled in.

Tom did atone for earlier missed inquiries and banked a long summer Chub of 3.10 but that was to be all for the day. My best of day tipped the scales at 5.11 but a certain six-pounder come the winter, all of which were in great condition and the colour of them is second to absolutely none, never seen Chub look so pristine and considering the Otter problem the seven fish we had were all in perfect nick. Can not wait to give it another go, itching to get back down.

Email ThisBlogThis!Share to TwitterShare to FacebookShare to Pinterest
Labels: chub, In search of monster Chub, PB's