A Change of Scenery, Same Species.

2017 has been so far dominated by Roach and to be honest I'm not complaining, the consistent dry, cool and cloudless days have meant that sport has been very good, two large bags of river Roach has really got me in the groove and loving it. What more could an angler ask for but be on the banks with the opportunity to catch such elegant fish. 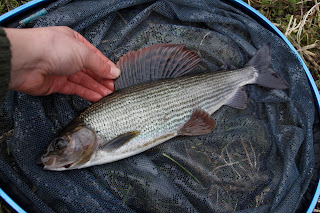 A change of scenery was in mind but the quarry very much the same and notably the appearance of lots of game fish was likely, just like when you buy a bag of liquorice all-sorts and my favourite ones with the little aniseed balls are few and far between, just like the Roach. I knew selecting Roach amongst the hoards of Grayling and Trout would be tough but it was challenge accepted, one that I happily took, with the morning's sport being fairly slow Brian and I peered through the polariod's in search of the distinctive shapes. It took a few hours to find them, however, inevitably the tell-tale silver flashes could be seen over the clear chalk bottom.

Before the Roach started to appear the Grayling put in a good showing as the morning was dominated by a wave of them, practically every trot resulted in either an indication or a fish, most of which were around the ¾lb mark with the occasional smattering of pound plus fish. This better fish below registered 1.11 and was the best of the day, the larger fish seem to be non-existent as the river seems to be a rich haven for young fish on the up, unfortunately not big just yet. 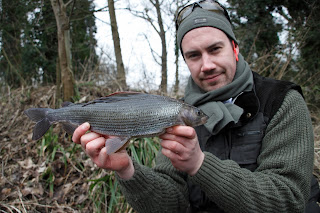 However we did finally come across a shoal of Roach and although they were tough to locate a couple were caught to 1½ lb, some of the shoal looked good but held back and proved difficult to tempt, this was a shame but at least it wasn't a blank for them. I know there are some really big fish lurking about but this time around it wasn't to be, the day wasn't over and we still had one last roll of the dice.... 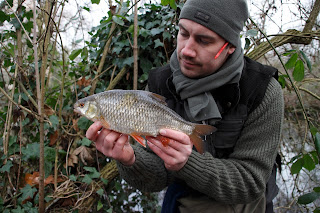 ......but the Roach just never materialised, plenty of trying but was rewarded only with a large bag of more Grayling, fantastic fishing with over 100 fish caught, have to do it again sometime.
grayling roach The Search For My Holy Grail