It's been nearly three months since I last took the boat out and my god it does feel like it, with slightly poor circulation of air in my fishing den it had a little mould beginning to form on it so the intention was to go for a gentle motor up the Thames to wash it off. Hmmm, I had visions that the river would be at its normal winter level, it is safe to say I was wrong!, the ample rainfall has the Thames pushing nice and hard with a distinct colour to it which I thought would make it very tough for Pike fishing.

Brian and I got the boat set and we hit the high seas, it really did look and feel as if we were on the sea, plenty of power in the flow, decent chop and that crisp sea-side feel out of the sun. I have to be completely honest that my confidence was not high, typically trips out in search of Pike in coloured waters have not been successful, I could only try knowing that we had six hours on the water. We both set up and put out a bait each, the piking pirate turned briefly after casting out to pass me his sandwiches to put in the dry bucket, within twenty seconds the bait was cast out and taken, the float had vanished before he turned back, now that's a confidence booster, a jack within a minute of anchoring up!

For me that early fish filled me with an early optimism, as the hours ebbed by and the tide came up to it's full volume my confidence had wained away entirely, then out of nowhere my float finally bobbed and slipped away as if to keep my focus on the job. That was the take I'd waited for, a good pull on the end was all I wanted, so that's what I got.

I did earlier in the day suffer a couple of dropped runs and a lost Pike but not to cry over spilt milk I continued to see if something would finally come good.

On something of not such a good note I found this horrible little rascal hunting on a local river of mine, something I've never seen before and had the displeasure of witnessing it catch a gudgeon of around 1.5oz which it had broadside across its snout before disappearing into some overhanging bushes to eat its breakfast, not good to see at all! 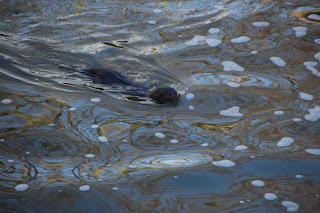 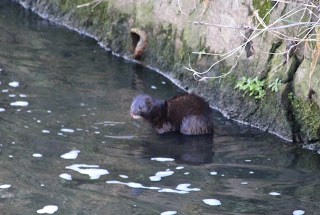