Over the course of this winter (when I've been in the country) I have found fishing quite challenging and that narrative seems to have continued, much to my disappointment. I was rather hoping for a purple patch where I got amongst some big fish. So far my winter fishing except for the Pike has been dour, conditions can be blamed but the buck often stops with me and my ability. The ever evolving angler will come across times when fishing is hard, just have to learn whats not going right and try to affect it. 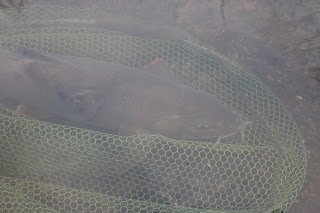 What with only six weeks of the river season left and so much still to aim at I can only manage short little trips locally as the post-christmas madness ensues where work picks up very quickly thus leaving with not much time and an untimely car issue that required a repair which rendered that out service for last weekend where I had the chance to shoot down to a Wessex river.

Rewind just a week before and I enjoyed a trio of barbel in just a couple of hours (10.06, 8.06 & 8.02), seven trips later which included five blanks, I added a further five barbel to that tally, three being youngsters around the 3-4lb mark, the other two were slightly more reasonable weighing in at 8lb 13oz and 6lb 7oz. Both taken on the float, which is a method of angling for barbel I adore, I just wish I could catch more doubles on the tactic, although you can only catch what's in front of you and over the last few years the doubles have been disappearing with only a smattering of them left as the youth are pushing through and the cycle will hopefully turn full circle over the coming years (possibly by 2022).

During my run of five blanks I fished all kinds of tactics, from roving about to staying out up to 90 minutes in each swim and laying a small bed of bait down with the hope of marauding fish finding my offerings and slipping up, I went through the phase of lengthening hook-lengths to fishing single baits, to small PVA bags and so on, no matter what I tried the outcome was the same. Maybe the fish weren't there but during this time of the year barbel are very predictable fish and I know "most", not all of their hold ups where depressions in bottom offer slightly more cover, these are often what I target knowing catches are more likely. Maybe they are just feeding late at night when I'm not on the rivers, over the next couple of weeks when a snippet of time comes up I may stick it out just to see if that theory rings true.

Current stocks are impressive but many small fish which bodes well for the future. This presents me with a dilemma as really would love to achieve a 15lb+ barbel over the course of the next 12 months and feel to do this I'll have to go elsewhere, as much of a shame as it is there isn't much point trying for something that ultimately isn't possible and efforts can be pushed elsewhere, so thats what I intend to do.

Catching barbel of this size though can never be disappointing and on the contrary I still enjoy every scrap now as I did when I caught my first one of 7lb 10oz when I was just 9 years old.....21 years ago!
- February 03, 2018