Since last May 1st myself and a dozen or so like minded anglers who dabble in a bit of blogging were embroiled in the second instalment of the "Bloggers Challenge", I have to say before I go any further that it was good fun and the competition was coming from all angles, what with my canal systems mostly devoid of fish it made for an interesting challenge. Well done to all of you guys who made it the success it was! 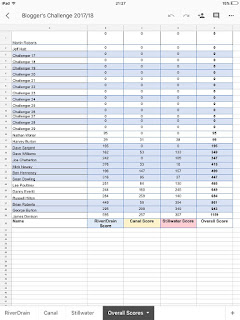 Massive congratulations to George Burton ( who's blog can be found here http://floatflightflannel.blogspot.co.uk ) for his stellar efforts and my partner in crime Brian ( http://www.pikeblog.com ) for a well earned third place. To win the bloggers challenge wasn't without its ups and downs as certain targets I aimed for failed to materialise, couple that with two and a half months out of the country during that time meant my fishing time was greatly reduced, although it has to be said I thoroughly enjoyed my time away!

My top 3 captures of the challenge have to be these. In ascending order:

Reasons for my choices are for different reasons but all boil down to the effort that is required to even get close.

Number 3 and the Golden Orfe, my target was a 6lb+ specimen and I thought I would have it wrapped up in no time at all. How wrong was I, three years later and a dozen trips I finally got my chance and with my target smashed, it was job done.

Number 2 is a tough one, but, I think number one just pips this to the top. I have settled on my river leviathan Common Carp at 28lb 3oz, which given my physical condition sustained on holiday was quite a feat. Having never laid eyes on such a beast on a river which was offering itself for an attempt at capturing this was one fish that never knew its mistake. A tense battle played out in the pacy current on my Mark IV 10ft cane rod and on the centrepin made this a truly wonderful experience when the sanctuary of my net meant I had won the battle of wills!

Number 1......Do I even have to say what it could be? Canal carp are incredibly rare where I'm from and to catch one in ten-twenty trips is good going, so to catch two in a day and both over 20lbs! It could only be this session as its one I am fairly sure I'll never emulate but the dream of a 30lb+ specimen for my " One Hundred Pound Challenge" is certainly, for the time being, still just a dream. But I will continue to search for that one fish which will certainly put me in a good position to achieve what is likely to be my toughest challenge yet. 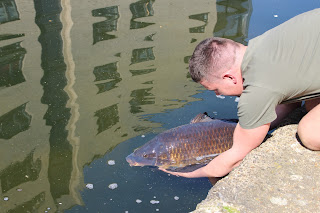 Once again, to all of those who entered and angled their way through the last twelve months. A massive congratulations!
- May 08, 2018