Carp fishing in my eyes is only as easy as you want to make it, especially when it comes to stalking. Lack of stealth, patience, watercraft and knowledge puts anglers at a disadvantage. Having all of the aforementioned and you stand a good chance at capturing your quarry.

The other morning I arrived on a lake I have been targeting of late to find it as still as I've ever seen it, no wind and with the sun not even above the horizon I had a good feeling some carp would be spotted. As the mist rose off the surface of the mirror like lake I could just make out the shapes of some fairly large carp, two or three of which were possibly thirty pounders! As they drifted in and out of view I hastily set my rod and net up with the anticipation that they would visit me again.

Concealed amongst some marginal reeds I felt confident that the marauding carp couldn't sense my presence and that any attack that I would spring upon them would take them completely off guard. For probably ten minutes or so I waited patiently before another shape slowly approached me, this fish, a common, possibly a mid double showed plenty of interest in something in the lake bed, with its snout churning up the sediment I couldn't ignore a feeding fish. A moist chunk of bread was eased into its path and within seconds the birdsong was shattered by the sound of crashing water.

At no point can an angler ever be more excited than be in contact with your chosen quarry, yes size may factor into how much you might enjoy the battle, I know myself that playing larger fish does have an effect on you that the quicker it is over the more I enjoy it! But the fact can't be denied that playing a carp is immense fun. Size wise, this fish weighed no more than 15lb (14.8 to be precise) but it mattered not, just an hour previous I was stirring in bed with this very outcome playing out in my mind.


On the mat a nice stocky common lye in wait to be photographed (just a quick one for the "smaller" specimens) in a very relaxed fashion, no nonsense, just in, out and back in for it to swim off strongly. But my rewards didn't end there as I replicated my earlier success almost to the letter, the only differences were that this common was slightly bigger and a whole lot more feisty. Run after run, lunge after lunge gave me plenty to think about and put my little Nash Dwarf "Abbreviated 9ft 2.75lb TC" rod to the test.

With such tackle and not much by the way of snags its pretty much plain sailing if the hook hold is good. Just a few minutes of battling my second carp of the morning was resting up in the net, it had been a good outing so far!


My first client of the day was booked in for 8am and time was pressing on so I had to decide on packing up around 715 to make it on time. Unfortunately for me that time came a little quicker than I'd have liked but it was good whilst it lasted.

On to the next visit which I believe was 4 days later and I aimed to do the same thing, this time around I didn't have work to dictate when I could leave! The idea was to start at 5am and remain mobile to locate feeding fish, with good conditions again I was able to keep a low profile off the water-line and select fish which were feeding within the marginal twenty feet.

Easy when it goes to plan.....now sometimes when stalking and a few fish have fallen foul to a bit of flake or crust you get the occasional carp which thinks its above the rest in regards to IQ, there is always a smart one which simply can not be fooled. I spent probably twenty minutes angling for this one particular carp before it shifted further and further out of the bay until I couldn't see it anymore.

Not to be deterred I continued my laps of the lake in search of something to cast at, those ghostly shapes began to become more and more difficult to find. It took me well over half an hour to finally locate a carp on the feed, for some reason I was seeing less than usual and not entirely sure why.

The carp that I had stumbled over was a good fish, certainly a twenty pounder. A wide back and really deep, its length was probably where it lacked, another half a foot longer and it could have been approaching the thirty pound mark. My stalking skills were called into action again, just like the morning trip previous. With the carp only feeding in little spells I had to guess where it would next put its head down, little puffs of silt would come up as its pectoral fins were wafting bits of debris up got me thinking, as a pattern began to emerge. Creatures of habit are always easier to target once they have been sussed out.

A minute or so passed by before she put her head down again and this time the bread flake was perfectly placed, the first thing that went was the bait, as I struck the water erupted and one very angry common charged off towards the middle of the lake. For a few minutes I played the fish at distance as it used the depth very well, long hard runs stripped line off the spool and whenever I could turn her head I'd gain line and this battle of wills played out until she began to tire. Once she started to ease in I shipped out the net and she was mine. 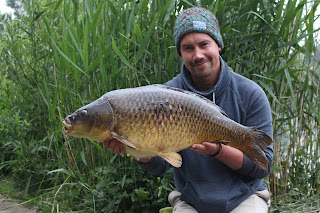 An old warrior of a carp, weighing in at 23lb 10oz I was happy with that, but clearly spawned out.

After releasing that carp I spent the rest of the early morning searching for another opportunity, which ultimately didn't come. I wasn't bothered. My day was to get even better though, in fact much better as I experienced the capture of a challenge threatening carp....that will be published on my next blog post so stay tuned!
- May 29, 2018